I watch their heads descend: neck, nose, and crown submerged like disappearing islands.”

Our bodies lift like buoys on waves. My family—father, mother, sister and I—are fifty metres from shore, the sand at Ulua Beach freckled with early morning joggers. Suited up in scuba gear, we paddle into surf and prepare to drop the red and white dive flag. A storm crashed through the night before, thrashing postcard blue ocean into emerald fog. It’s New Year’s Day, Maui.

“Ready to go down?” asks my sister, Alisha. My father already has his regulator in, my mother is brushing wisps of chestnut-brown hair from the seal of her mask.

“Going down,” my father says, voice like wet static through his reg. He gives a thumbs down with one hand and releases air from his buoyancy control device with the other. Alisha and my mother do likewise. I watch their heads descend: neck, nose, and crown submerged like disappearing islands. I put my reg in and drop the dive flag, following the twist of rope toward sandy bottom. 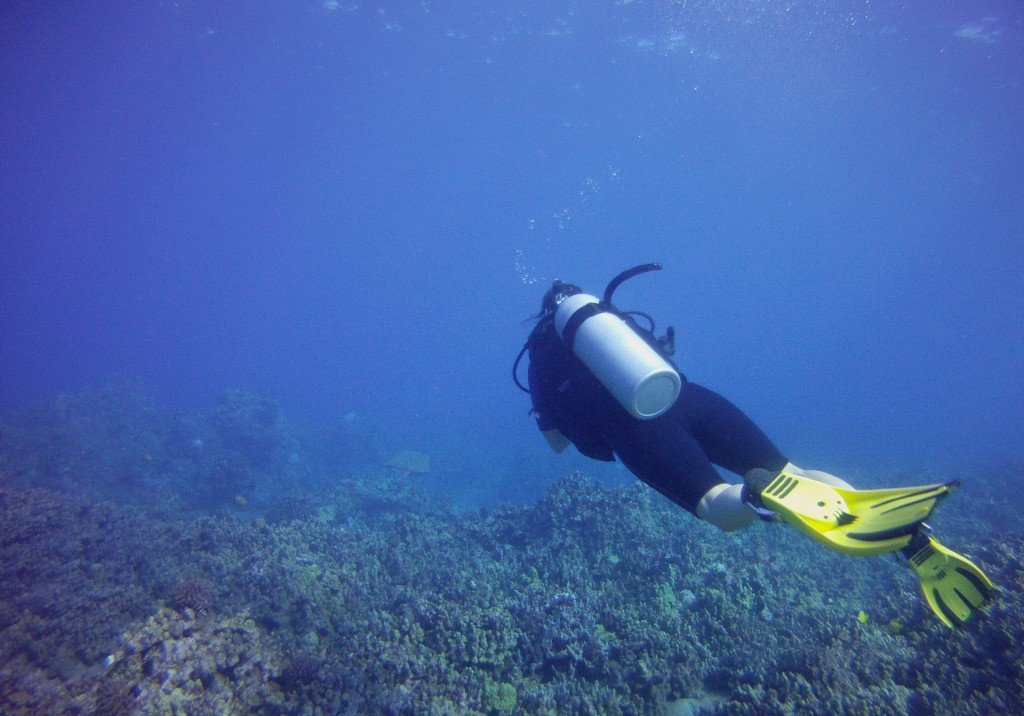 We visit every winter, always staying on the same stretch of South Kihei Road between Kamaole Beach and Azeka Place Shopping Center. We come to dive; to avoid the frustration of Christmas presents; to enjoy the bright, juicy fruit; to bask in the company of others who can afford to escape Vancouver’s dreary winter months. For two or three weeks, our lives are easy.

But even in the idyllic setting of palm trees and Happy Hours we can’t leave behind the familiar disputes of family, parents and adult-children marooned under one roof. We almost didn’t dive this morning: there was an argument between my parents over who would pick up the tanks, I was hungover from New Year’s and desperate to sneak off for a cigarette, and Alisha became so agitated when we didn’t make time to sit down and eat her pancakes, she threatened to pack her sun cream and ditch us for a solo day at the beach.

“You think I care what you do?” I said. “And you sliced too much grapefruit into the fruit salad. My mouth feels all puckered.”

I feel a vague sense of guilt when I come upon them like this, as if I’m disrupting the intimacy of lovers between the sheets.”

I give my sister the hand signal for okay—thumb and pointer pinched together—and she mirrors the signal back. A shoal of bluestripe snapper splits around us, shimmering dark eyes and necktie tails. Everything is twisted underwater. A car’s length away my father mirrors okay with my mother before he turns to the compass on his left wrist. Visibility at Ulua Point is poor today, 10-15 metres at best.

My father kneels on the bottom to draw a map with his finger. He outlines the reef along the point, shallow and teeming with snorkelers, their pasty underbellies presented like white fillets of fish. He draws the second reef, home to octopus and shoals of butterflyfish, and then the third where we hope to find boxfish and spiny puffers, convict fish and spotted moray eels that are thick as my father’s bicep and over a metre long. He makes an X and traces our route to the third reef and back to the dive flag. I nod, give him an okay sign, but notice that Alisha and my mother have lost interest, hypnotized by a turtle the diameter of a school bus tire sailing like a ghost into the deep.

In Hawaii, sea turtles are as common as lampposts. On the surface their paddle-like limbs appear gawky and inept, but underwater these turtles transform into a different species altogether. A cross between a graceful equine and a Buddhist monk. We find them in caves, coupled next to white-tipped reef sharks under rocky outcrops. I feel a vague sense of guilt when I come upon them like this, as if I’m disrupting the intimacy of lovers between the sheets.

My father is our navigator, on shore and undersea. The difference in diving is that we can’t lambaste him for missing a turnoff. This happened the other day when we were driving upcountry.

“You passed it,” my mother said, more to the windowpane than to my father.

“Passed what?” he said, glancing in the rear-view.

“The fruit stand,” I said. “The one that has the good lemons.”

“Never mind,” said my mother. “You always drive too fast.”

Beside me in the back, Alisha rolled her eyes. “Just get them at the grocery store,” she said. “And can we please listen to something other than talk radio?”

Exhaling, I sink so my stomach presses against sand and I cast a glance under a rocky ledge. No sharks. I feel a tug on my fin and turn to see my mother, waving me over.

Her eyes are as big as cartoon Tom’s or Jerry’s as she points out a tiny nudibranch on pale green table coral. Nudibranches are what children would design if you gave them a box of felt pens and told them to draw a slug any colour. Technically, nudibranches aren’t slugs, but shell-less marine gastropods. Their flashy colour combinations—black, white, and violet; pink, mauve, and sungold; fuchsia, turquoise, and royal blue—make them easier to spot than an Ibiza raver at a suit and tie dinner party. This one has inky geometric lines over a translucent body and a pair of dandelion-yellow tentacles. I give my mother the hang loose sign—pinky and thumb extending from fist.

The four of us converge on a family of black damselfish hovering over antler coral. My father pokes around, and all but one retreat like shadows into the coral tines. This scrappy fish, no bigger than a toddler’s fist, darts toward my father’s mask to meet him between the eyes.

My father advances closer still and the fish continues to defend home turf. My mother gives a look that says, “What is he doing?” and I feel a jab of annoyance as well, similar to when he missed the turnoff for lemons but this time I can’t say anything. The tank on my back shifts and I watch a spiral of bubbles drift upward.

Alisha has floated off to unearth an old-fashioned brown bottle from the sand. She raises the bottleneck to her regulator, spilling sandy contents while doing a charade of inebriation. My mother and I laugh, squeals like flashlight beams in a dark room. I think of last night, New Year’s Eve.

By eight o’clock my mother was napping on the sofa.

“C’mon,” I nudged Alisha conspiratorially. “Let’s go for a walk.”

My sister and I had plans. We were going to the Bar-muda Triangle, an alley of rickety patio bars and nightclubs just off of South Kihei Road. I’d put on my only clean skirt and she painted her lips hot magenta in preparation for an eve of inordinate drinking and uninhibited dancing on beer-spilt floors.

“I’d like a walk,” chimed in our mother, lifting her head from the sofa cushion for the first time since dinner. “Laur, you want to come?”

Our parents weren’t as quick to ditch as we imagined and joined us at a dive bar with no windows but cheap draft beer and long wooden tables. Even the country-goth band didn’t deter them—though the music sent a couple of other tables out the door. But they stuck with us, footing the bill even though my sister and I were downing beer as fast as the server could bring them. Walking home through the sulphur haze of firecrackers we proclaimed resolutions—“To quit making resolutions!”—and for a moment, my heart swelled right though my shirt.

It didn’t last long. Once we arrived to our bungalow buzzing with mosquitoes and giant moths, we proceeded to argue over who was responsible for leaving the windows open.

My father is our navigator, on shore and undersea.

The singing rises in crescendo, rushing over like a cresting wave.”

We reach the second reef, pause for a moment to check our air, and follow my father and his compass over the sand crossing to the farthest reef. I swim just off the bottom like a hovercraft, eyes trained to sand for garden eels or flounder, a slithered track that might lead to a snail.

The third reef consists of living coral walls carved into maze-like passages that beg to be investigated. Less than an arm’s length away, tangerine and teal-scaled parrotfish snap off fingers of coral, a crunch like sneakers on playground pea gravel as their beaks pulverize hard coral skeletons to extract the algae. Trumpet fish, silver like polished metal, mingle with black and yellow tangs. On the seafloor a lizardfish poses half-buried in sand, a Cheshire Cat grin of pointy teeth waiting for an unsuspecting victim. I follow my sister’s eyes to a pair of Moorish Idols, their black, white, and yellow striped bodies smooth like polished plates, waltzing along a coral wall. Life jumps from every crevice.

Soon, my mother taps her air gauge to indicate she has less than half a tank. Time to turn back. My first instinct is to see if my sister has more air; perhaps the two of us can continue to explore while our parents return to shore. But I notice cold seeping into my abdomen, shrivelled fingertips. Suddenly I ache for a mug of post-dive coffee to warm my hands. My father sets the compass for shore. I begin to notice a wail, low but rising steadily. I look over my shoulder expecting to see something, but there’s nothing but sand. Then I hear it again, this time coupled with one of higher pitch. Whales, I realize. Humpback whales!

Humpbacks migrate from the west coast of North America to Hawaii so that they can give birth and nurse their young. I turn to the nearest person, my father, and tap him on the shoulder. I point to my ear, listen, but I can’t recall the signal for whale. He watches, confused, as I point to my ear again and again, each jab of my finger more frustrated than the last. The singing rises in crescendo, rushing over like a cresting wave. My mother and Alisha are with us now, watching as I gesture, unable to finish this two-word sentence. Listen, listen.

My mother nods and responds with the signal for whale—a cupped hand in a jumping motion.

The four of us hover, transfixed. I wonder what these whales are chirping about. Do whales sing to communicate need, or simply pleasure? Do they express strife in ear-piercing shrieks and sunken wails? Perhaps. But the song we’re receiving rings cheerful. I imagine a mother humpback teaching her calf to barrel-roll for the very first time and look to my parents, my sister. Unlike humans, humpbacks don’t maintain long-term family relations; while the calf will stay with the mother until it’s weaned, the father leaves shortly after his sperm is spent.

My sister and I have long surpassed our biological need for care, yet here they are: our parents. And as much as the four of us disagree, at least we’re on the same side of the Pacific. I need to tell them this, I realize. Now. Before the thought is cast off in the furor of surfacing.

But then I turn to see my parents’ and sister’s faces, stilled with contentment. I realize that they must also know: we are lucky. To be here, together. Whale songs speak for all we don’t say.