September 2nd is National Day in Vietnam. Congratulations to all those in Vietnam celebrating their independence today and around the world!
-Mo

I came to Vietnam with my mind like a jam jar: mostly empty.

In Vietnam, there are trees that drop white starlike blossoms that stay crisp and pure for hours behind your ear. Those flowers are important to me, those creamy velvet petals, with yolky yellow splashed at the center. I paint, back home, and I like details, like the curve of a leaf, the carving around a window, the color of a toad’s eye. I came to Vietnam with my mind like a jam jar: mostly empty. I wanted to experience everything with fresh eyes and without preconceptions. Every jam jar has a little left at the bottom, though, and the bias in the back of my mind prepared me for hostility and dingy, malicious colors. Once I opened my eyes, though, I saw some of the most beautiful shades of the world I’ve ever seen.

I expected to see a lot of red. I expected bright, loud, plastic-y fake red, because my usual encounter with Asia has been shabby chinese restaurants and ethnically inclusive holiday decor. I expected the firm, imposing red of the hammer and sickle, because, after all, Vietnam is Communist. The war between Vietnam and the US has been over for what to me seems like a long time, and rationally I knew that Vietnam has recovered a lot since then. I cannot imagine recovering from war, though. In the back of my head Vietnam was still gunpowder grey and brown, scarred and barren dirt, broken trunks of trees sticking out. I expected resentment and bitterness and trauma. 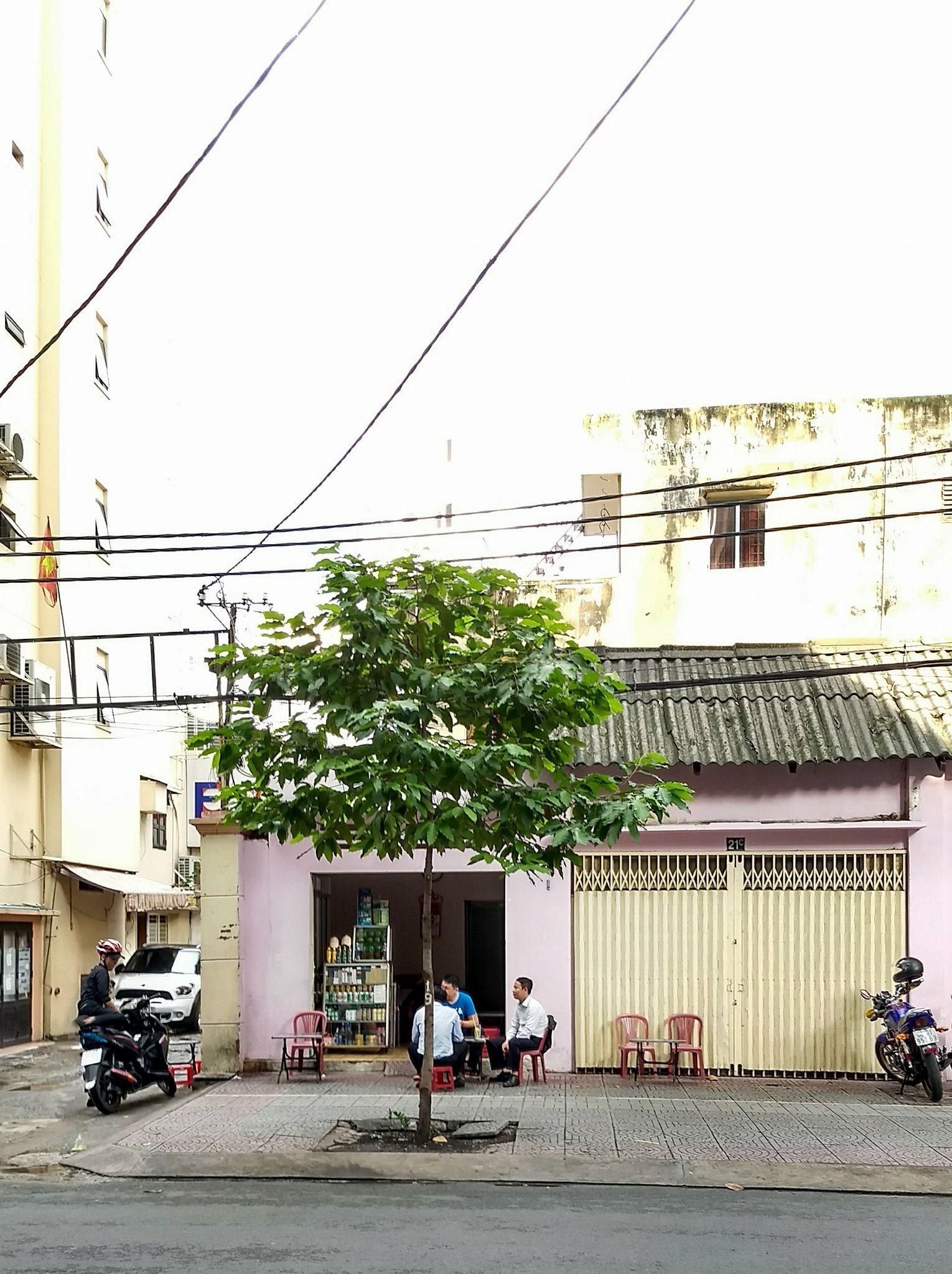 My dark imaginings were embarrassingly off. Instead I found a country unconcerned with the US, busy with its own things to think about. The jungles aren’t vicious, cunning, or tricky; they’re just lush green spaces minding their own business. The cities are bustling, grey with the progress of concrete and glass, and green with the jungle that they share their spaces with. The colors I found were familiar and ethereal at the same time, and they made me feel both at home and full of wonder.

The traffic in Ho Chi Minh City is everywhere, never going very fast, but a lot of it. There are a lot of neutral colors, as with any city: blacks, greys, whites, creams, dirty walls that need whitewashing or fresh paint. The neutrals reminded me of teeth and stained tupperware, plastic silverware and the graphite smudge you get on the side of your hand if you’re not careful when you draw. I see the same neutrals in America. There are other colors too, colors I don’t see in my American cities. Liberally sprinkled among the grey buildings, faded pink, yellow, green, blue, and orange apartments sit side-by-side like popsicles. A Latino friend who was with me said the colors reminded her of Mexico: in slight disrepair, but bright all the same.

The colors I found were familiar and ethereal at the same time. 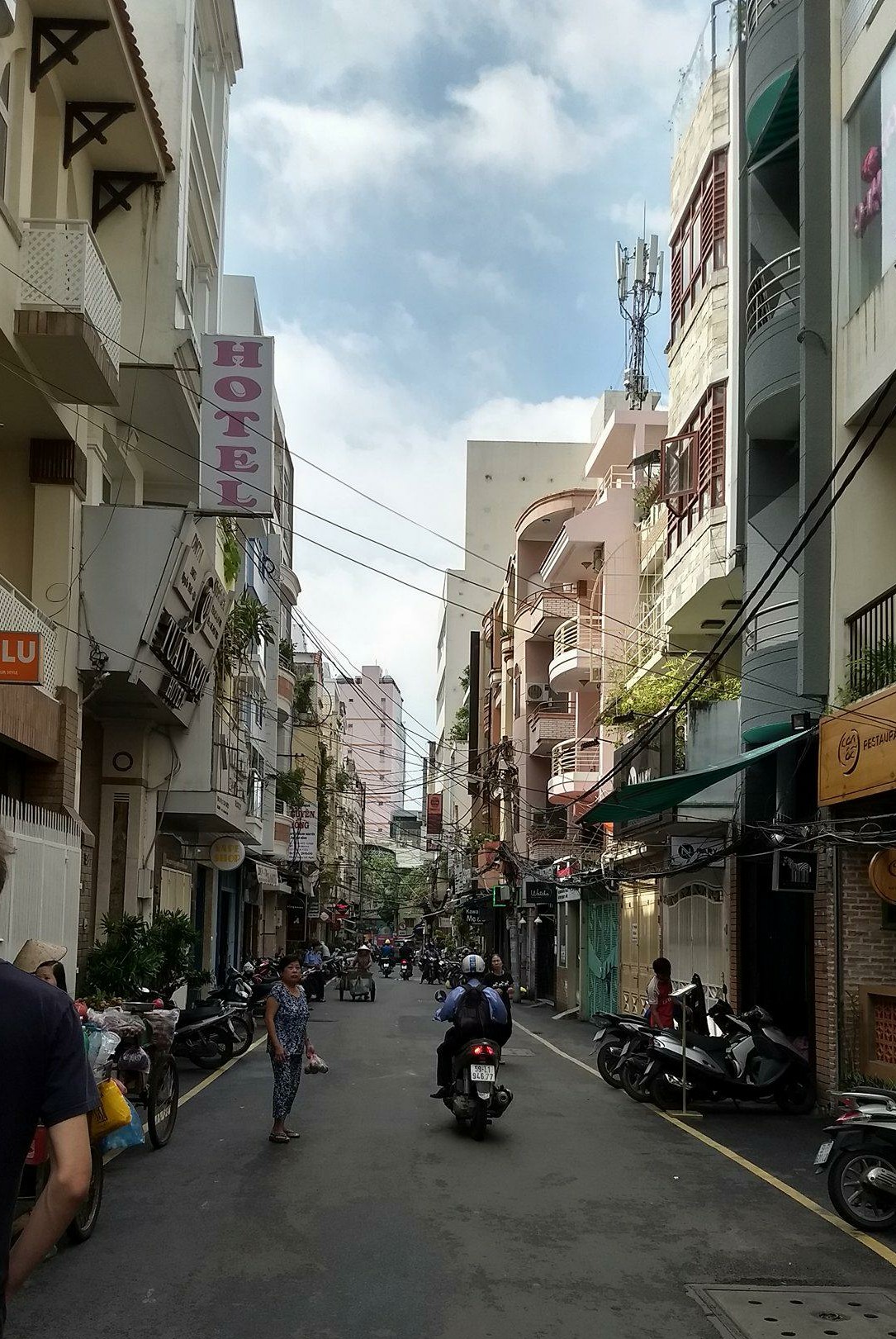 I thought traveling internationally would be grueling. Instead, Ho Chi Minh City felt like  home.

Throughout Ho Chi Minh City there are plants. I saw bonsais in front of banks, orderly in identical concrete planters; discarded offerings of flowers every few steps along the sidewalk, half-wilted yellow petals waiting for the garbage collectors; parks with fountains and fish ponds and huge, old trees; a thousand different potted plants on a thousand different balconies. Some balconies had long, trailing plants that, blending into the next balcony’s foliage, make the apartment look like one large moss-covered rock, like an ancient thing, a statue that’s been lost in the forest for a long time.

I’ve never been outside the US before my Vietnam trip. I thought traveling internationally would be grueling. Instead, Ho Chi Minh City felt like a home. Even though I didn’t speak the language, by the end of the trip I knew how to find my way to school, to the good restaurants, how to ask for the bill; had found good cafes and knew which candy in the co-op was the best. I’d made friends, which I didn’t expect at all! Vietnamese people are like Texas people: some nice, some not, all complex. At one little shop in the backpacker’s district the elderly shopkeeper asked where in America I was from. I was ready for conservatism and scolding war reminiscences, but instead he told me he knew where Texas was, that he always flies through DFW when he visits his daughter. She lives in Florida. He talked to me for a while, long after I’d bought what I wanted, and I was reminded of the old people at home in Texas having garage sales who want to talk more than anything. At a different shop on a different day, a friend put his phone on the ground while he found his money. A old, old woman who spoke no English at all, forehead furrowed with worry, called over her neighbor and communicated through him that it was dangerous, that the motorbikes might come by and snatch his phone and be gone. The neighbor gave us all sweet cakes wrapped in banana leaves. Not everyone was that personable or friendly- but the city felt like the home I was used to.

The jungles outside the city felt like the home I’d always wanted. The Mekong Delta was flat compared to the mountains of Sapa, but both were jungles to me. They were like a dream. The colors are like the colors in a vintage children’s book: soft, faded, flat, bright. Kind. The neutral shades of the city are almost nowhere in sight. The houses are soft pastels. They are yellow: pale, smooth, nostalgic, the color of a dress in an old color photo, or the color of a half-forgotten memory that’s still a happy one. They’re orange, like a creamsicle, light, sweet, non-threatening, like the pale East Texas dust. They’re green like dusty frog rainboots, and dusty butterfly blue. I saw pale, bright pink, which felt sweet and fresh and kind, and clean grey which felt honest, solemn, but happy.

There are shades of green that I’ve never seen before: bright green, apple greens, yellowy green and deep blue greens, dusty sage greens and dark forest greens and greens so bright and pure that they almost make you want to cry. I felt the euphoria of seeing something perfect. It’s the same feeling I get when something’s completely spherical or completely flat or when people take the alphabet pasta out of their alphabet soup and organize the pieces letter by letter. It seems ridiculous, but I feel like witnessing those colors made me a better person. What is beautiful is not necessarily good, but standing in the middle of a jungle that is quite literally glowing made me rethink a lot of what I thought I knew. 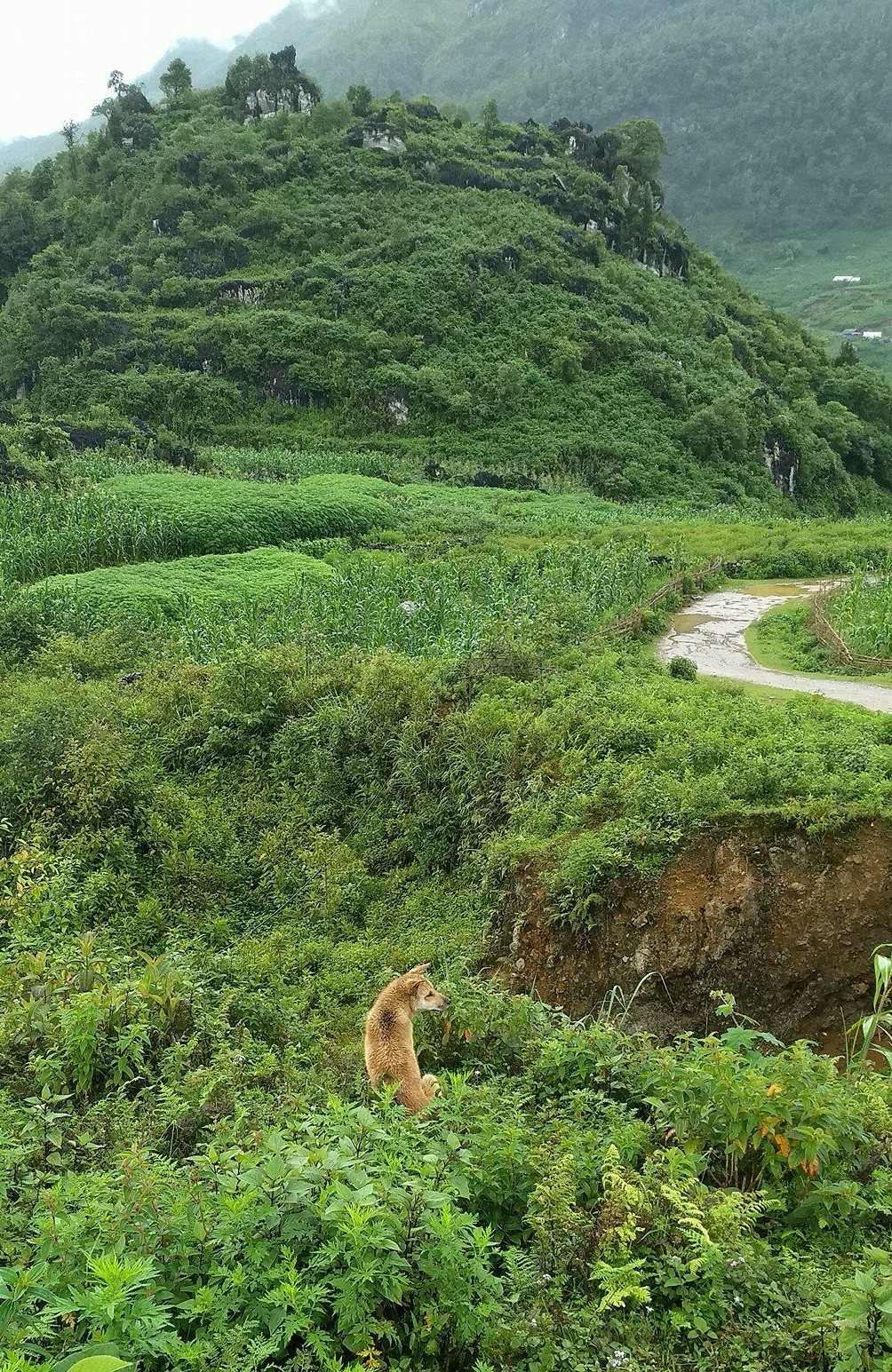 If you go up into the mountains, the sky is white. It feels like standing inside a lightbox: the sky is pure white, luminous, blue like clouds reflecting in the ocean, grey like the feeling of falling asleep under a warm blanket with someone you love, like a cat, like the thin smoke from a little fire. All clean, wide colors, close enough to grab a fistful of cloud but also impossibly far away, like a fairy tale you know by heart. Soft, homey colors. The sky brought rain every day and everything is freshly washed, all the time. There is mist everywhere, almost ridiculously atmospheric. It’s surreal in the best sense.

It’s like being in a painting, or a song. Everywhere around you there are glowing growing things. Nestled in between the trees are airy houses in pastel tones, like someone spilled a basket of dusty jewels across the hills. There’s a dog or two, mostly earthy tan shades, at every other house, sometimes watching you go by, sometimes absorbed in their own business. The chickens rustle around in the ditches. Sometimes a rooster gets spooked and runs as fast as he can back towards his house in a frightened blur of orangey-red feathers and awkward neck. The ducks follow each other across the roads on their mysterious duck voyages, in a parade of white, black, brown. I was sweaty and filthy and dirty, felt out of shape and imperfect, but I was happy, as one is in a wonderful dream.

I am in love with colors. At home I hold fruit preserves to the light to watch them glow. I keep a lookout for the little iridescent beetles. I notice the brightness of the trees after it rains. I brought back souvenirs for my family and friends, but what I will keep with me the longest is the colors. I expected red and pain and brown and broken trees. Another friend who came on the trip said he was expecting dirty brown shacks and of course, the angry jungle, but it wasn’t there. The bias I didn’t even know I had prepared me for harsh, sneaky, violent, duplicitous colors, but instead I found vibrancy, peace, and the best shades of green I’ve ever seen in my life.

It’s like being in a painting, or a song. 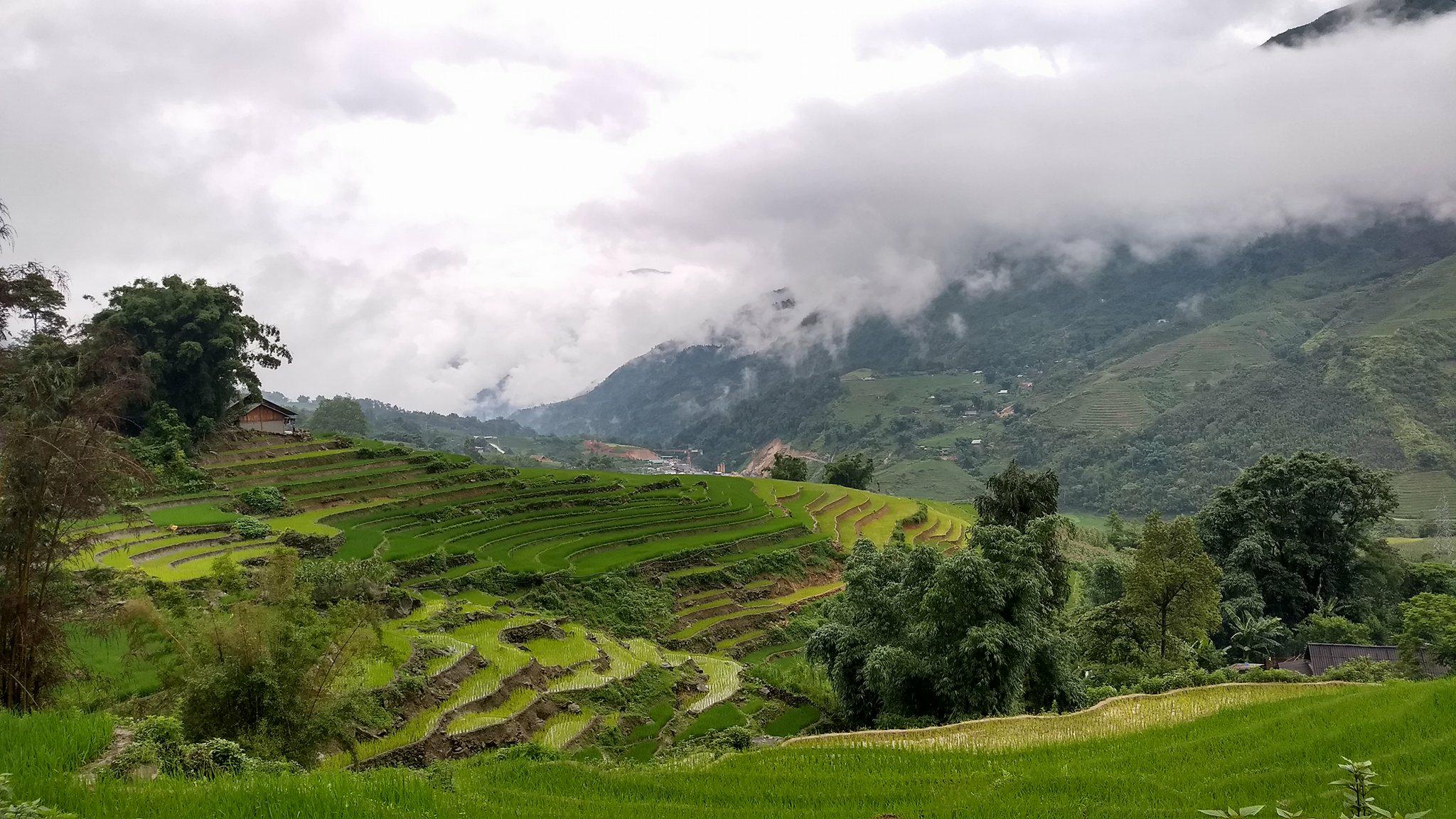 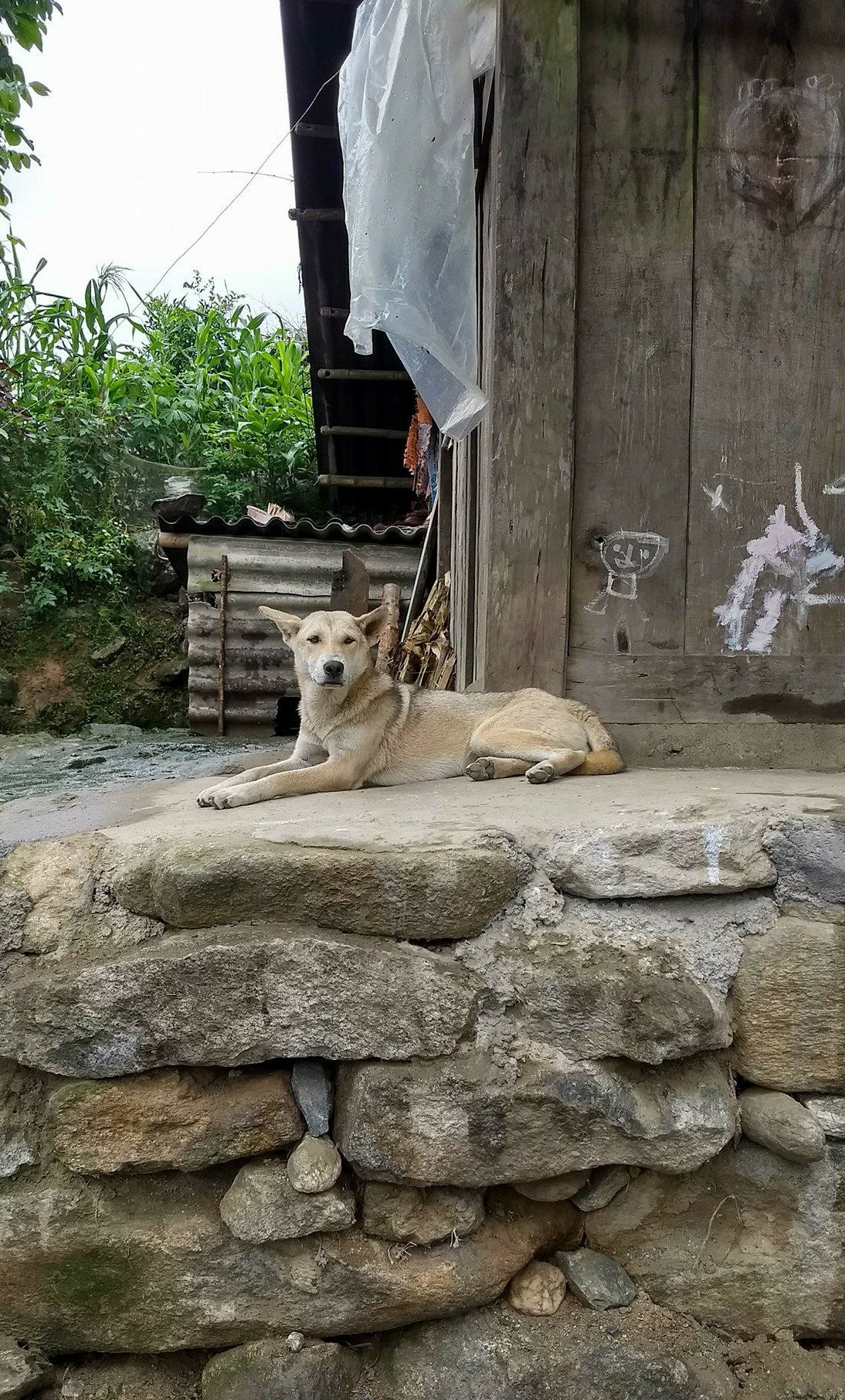