I knew him before perfection kicked in. I’ll call him “M,” and in my memory he’s half-naked and sweating on a musty-smelling hotel sheet. The ceiling fan rotates slowly and clicks with every turn. M flicks a cockroach off the pillow, and clamps a cigarette between his lips. His face is overgrown with a scruffy beard. He looks at me, smiling. I smile back. The smoke from our cigarettes mingles and swirl around our heads as lethargically as the fan.

Recently, a friend emailed me a link to a blog, with the subject line, “Recognize anyone?” I clicked the link and found a photo of the blogger and her family. The husband’s face is older now, of course, and baby’s bottom smooth. It was M, but a grown-up version. We weren’t grown-ups when I knew him. We were something else.

We’re in Varanasi, and though our hotel is too hot and too roachy, it’s cheap and our window overlooks the Ganges. We wrap up in the sheets and lean out the window to catch the cool air outside. On the ghats below us women do puja. We are so close we can hear the tiny splashes of water around their hands and ankles as they lean forward to set bunches of marigolds afloat.

I remember the sadhus with painfully thin bare legs—tiny brown flamingo legs—and their painted faces and the way they stared at us and leaned over so far that I thought they would tip over.

“It’s snowing in India, God Damn! Can you believe it?”

I remember the fire on the burning ghats, and the tinny bings of the finger cymbals and the chants of “Ram, Ram, Hari, Ram.” I remember the sadhus with painfully thin bare legs—tiny brown flamingo legs—and their painted faces and the way they stared at us and leaned over so far that I thought they would tip over. But who knows if that’s what really happened, if they were even close to us at all, because that was the same night we were so high on bang lassis that we lost our way in the narrow alleys and ended up at the burning ghat.

We watched a body burn that night. The wood underneath the corpse turned orange, then red, and the flames made an outline of the body and then it moved, I swear it moved. It shifted in the fire and for an instant I was convinced it was alive. I clutched M’s arm and screamed. The cloth the body was wrapped in burned off first so the person was exposed. We felt the heat and the smell of burning flesh. We turned away because watching a human burn—even if they’re already dead and you’re high as a kite— is unsettling. So we sat on a concrete step and suddenly M laughed.

And we stuck out our tongues like we were kids until we realized it wasn’t snow after all, but instead ashes from the burning body above us that we licked from the sky.

There was unrest along the Jammu-Kashmir boarder, but we felt invincible. We fought crowds at the station to get cheap seats on the night bus. The driver was a Sikh who cursed in sing-songy English through the evening city traffic, but then grew quiet as the roads emptied and the sky darkened. We held our breaths and leaned on each other, pretending to be asleep, at every checkpoint where soldiers with flashlights and AK47s waved the bus forward. We were glad when the sun rose and the bus finally stopped. Our first image of that border town, Pathankot, was a dead black bull in the road, fresh blood leaking from its head. 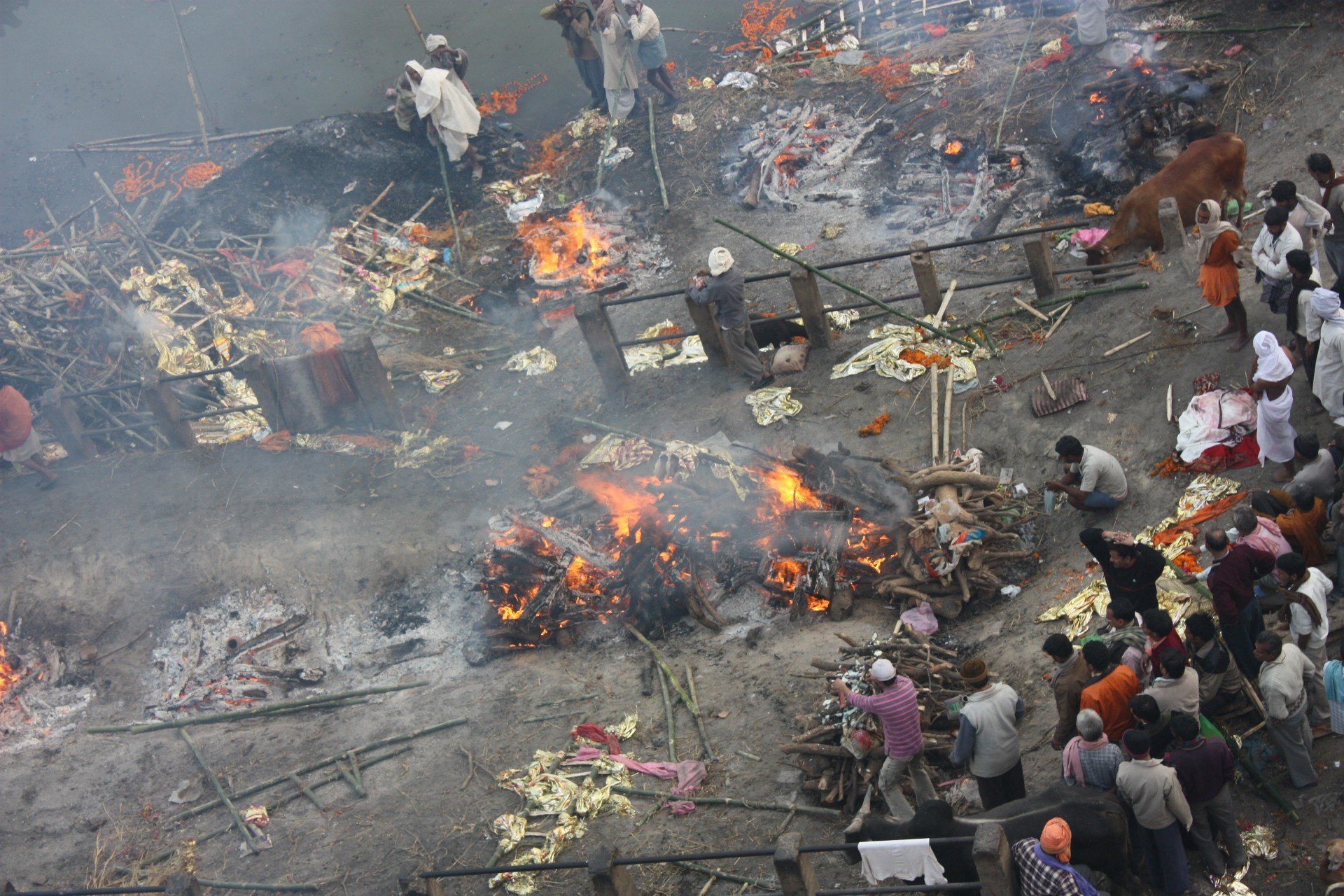 The blog shows no sign of M’s younger self, no hint of who he was when I knew him. I wonder if he has his khata tucked away in a box somewhere? We took the bus from Pathankot to Dharamsala because we’d heard it was a town full of hippies and artists and good, cheap food. That first afternoon it rained and we found a café in Mcleod Ganj that looked warm. We drank weak filtered coffee and ate chocolate cake. Later, under grey skies, we spun the prayer wheels outside the Tsuglagkhang Complex. A Tibetan man appeared and asked us if we were there to see the Dali Lama. “If so,” he said, “come back tomorrow morning.”

We bought the khatas from a Tibetan shop that evening, and the next morning went back to the monastery to wait. A throng of Tibetan refugees was there. They welcomed us into the fold and we waited together. It smelled like juniper smoke and Yak butter tea. I wonder if M and I share this sensory memory? Someone who spoke English said that most of the waiting people had walked over the Himals to get here. Some arriving as recently as the day before and yet they pushed us—two pale strangers— to the front when the Dali Lama appeared. His presence was overwhelming. His body was so small we had to dip our heads low after he blessed the khatas we’d brought so he could reach up and place them around our necks. M and I both wept.

His body was so small we had to dip our heads low after he blessed the khatas we’d brought so he could reach up and place them around our necks. 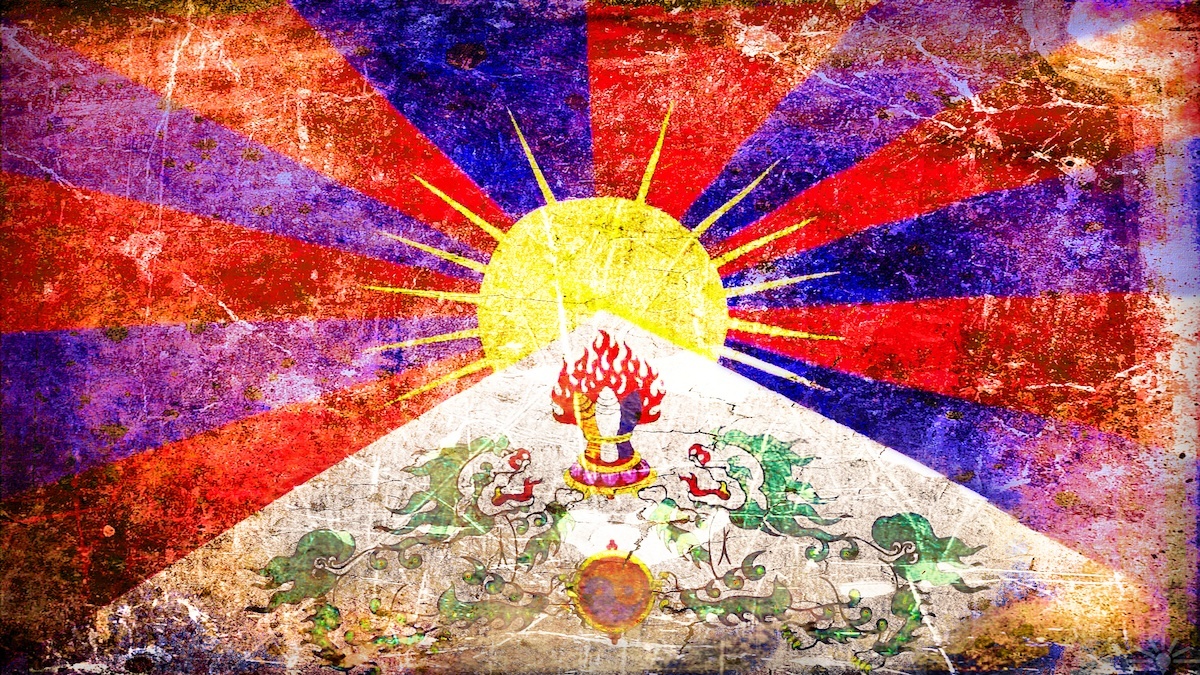 I want to remember how happy that girl felt, lost and wandering, but wanting absolutely nothing else.

I don’t have that khata anymore. Somewhere between age 23 and 44 it disappeared along with my smoking habit and willingness to sleep in roach- infested beds. The man in the photo isn’t the same M I knew. Not any more than I’m the same girl who rode for 36 hours in a third-class Indian train compartment drinking tea and then regretting it every time I hunkered over the hole in the lurching train toilet. The teacups the chai wallah brought were little unfired clay ones that you were supposed to toss out of the train window when the tea was finished. M did—gleefully. He’d been a college football star, so his cups flew through the air fast and so far and the betel chewing men around us whooped through bloody looking mouths. I liked the cups and kept mine in a pile in my lap. When the train reached the station at Lucknow in the middle of the night, I was so desperate for a real bathroom I forgot about them. I jumped up fast and they crashed to the floor, leaving nothing behind but dust on my salwar kameez.

Twenty-one years lie between that trip and my click on the blog link. When I saw that picture of M, it all came back. No just the trip, but the feeling I had at 23 that anything was possible. The whole world was cracked open for me like a pomegranate and all I had to do was reach for it. Now, with kids and a husband and a mortgage and a job, it seems like more than 21 years separate that girl and me. Questions I didn’t even know to ask then have answers, and days have a steady beat, a predictability I didn’t know I’d want. I wouldn’t go back. But I love that girl I used to be, and I’m grateful for the rush of memory the photo of M gave me. I want to remember how beautiful the bright ashes were as they flew up into the Varanasi night and melted down between the stars hung over the Ganges. I want to remember how happy that girl felt, lost and wandering, but wanting absolutely nothing else. 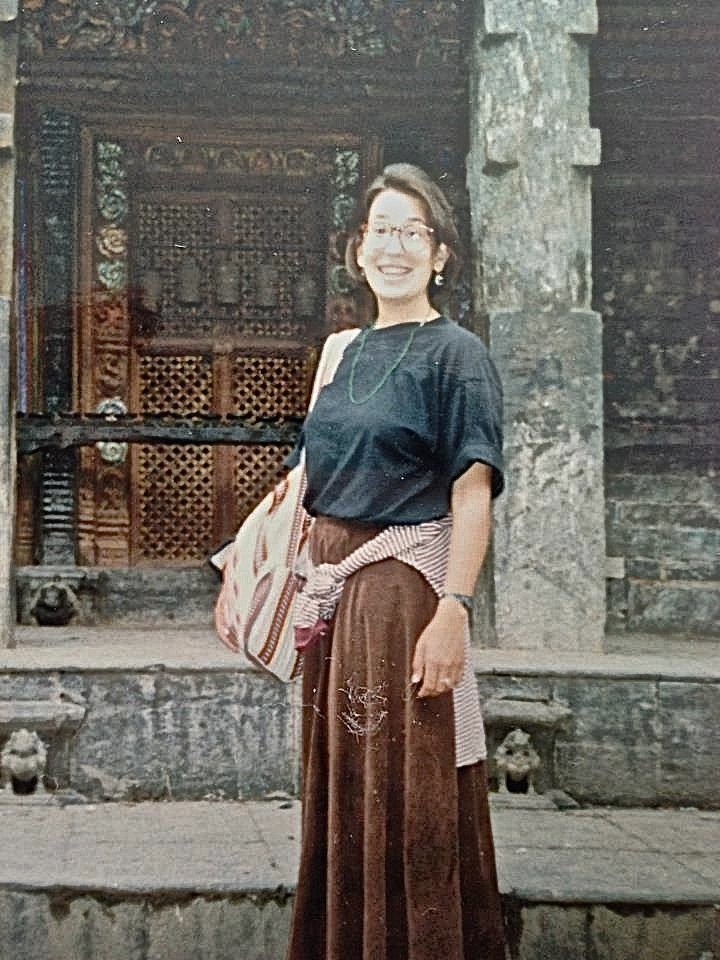