Thanks to SD Williams and Justine Williams for co-authoring this piece.

“Rock music is the most important music that exists. Rock has everything. Everything comes from rock.”

Alberto Valdés Lumpuy spoke from the kitchen of his small, attached, concrete home at the end of a dusty street, beside a fence of corrugated metal, in Sancti Spíritus, Cuba. Like almost every building in the nation, the exterior walls were cracked and patched. In Cuba, all structures are simultaneously and perpetually crumbling and being repaired. Outside, the heat and light had compelled us to walk slowly and bow our heads. Inside, the rooms were neat, spare, clean, and cool. From the kitchen window we watched turtles float listlessly in a small brown stream that feeds the Yayabo River. We asked Alberto about paying the price for rock and roll.

“I am temperamental, sangineo,” he declared. “I am a metaléro,” a metal head.

His son Dennis, slender and elegant in contrast to his father’s compact ferocity, added, “Really, my dad is very impulsive.”

In 1980, when the Soviets held sway over the Cuban revolution, the Partido Comunista de Cuba sanctioned Alberto for displaying his love of rock music. He was kicked out of the university at Santa Clara, where he’d been studying English. He lived through the Soviet era and the ensuing Special Period, the years of severe deprivation after the Soviets left in the early 1990s. He became a cobbler. When we first talked, in October 2014, he awaited the reopening of relations between the United States and Cuba and believed it would have to occur under the next U.S. president, as Barack Obama so far had failed to deliver. This would soon change, although the effects in the provincial capital will come slowly.

Alberto never abandoned rock and roll, despite the price he’d paid. With his friends Miguel Angel Valdivia and Tirso de Oca, he organizes the monthly La peña de rock—loosely, Rock Night—in this provincial capital city, an agricultural center in the middle of the island. On those nights, metal rips through the PA speakers in the open-air courtyard of the Unión Nacional de Escritores y Artistas de Cuba. Accepted behaviors are shifting in the country. Rock is not encouraged, but it’s no longer denounced. Alberto and his colleagues are on a mission. They want to restore this almost banished art form to Cuban life. They are as serious about its place in culture as others might be about opera, ballet, or the novel.

Sancti Spíritus sits astride the slow Yayabo River about 350 kilometers east of Habana. In the south of its namesake province lies the UNESCO World Heritage site of Trinidad on the Caribbean. To the north, facing the Straits of Florida, are the Parque Nacionale Caguanes and several islands of the archipelago where Hemingway used to fish. Here in the center, the city celebrated its 500th anniversary in 2014. The central government restored buildings, repaired cobblestone streets, installed planters, and renovated the central park. The city of about 100,000 people features several fine colonial-era buildings, but it’s not a destination. There are government offices, a hospital, and a small branch of the university. Downtown, people step on and off the two-foot-wide sidewalks, navigating each other and street traffic as they walk to work, school, and shops. Few if any are tourists. Bicycles, motorcycles—many with sidecars—horse-drawn carts, and old American and Russian cars share the narrow streets. Surrounding all are fields and farms. Sancti Spíritus seems an unlikely place to save rock and roll in Cuba.

Sancti Spíritus seems an unlikely place to save rock and roll in Cuba.

The cultural authorities. It doesn’t have a rock and roll ring to it.

“We would like to welcome our visitors,” announced Alberto in English learned decades ago but rarely used. We had not yet met him, but Dennis had told him about us. He stood with a microphone in hand at the front of the courtyard of the Unión Nacional de Escritores y Artistas de Cuba. He gestured toward our table. We were the only Americans in the gathering of about 150 people. We were likely the only Americans in the city.

Where did the crowd come from? You don’t see them walking in the small provincial capital in daylight—the young men with the goat beards, hiking boots, and baggy shorts. The young women in AC/DC T shirts. Maybe they bury their passion in public and in the light. People once lost jobs and social position in revolutionary Cuba for displaying affection for decadent capitalist culture.

It turned out that Alberto’s co-organizer Miguel was a drummer. He had escaped sanction, flying further below the radar than Alberto had. He’s a veterinarian. We met him later at the city’s central park.

Miguel’s band, Blues Connection, plays only occasionally in Sancti Spíritus, usually being sent to gigs at the tourist areas around Varadaro. “Rock and roll is neither prohibited nor discriminated against in Cuba,” he emailed later. “It’s only that imported music, which primarily is in English, is not a priority for the cultural authorities.”

The cultural authorities. It doesn’t have a rock and roll ring to it. The vast majority of restaurants and clubs in Cuba are owned by the government, and most entertainment must be approved by committee before it’s booked by local managers. Every day, in every club and restaurant that they visit in Habana or day trip destinations, visitors will hear the haunting, beautiful, traditional Cuban music that Ry Cooder brought to the rest of the world through the Buena Vista Social Club album and Wim Wendors’ film of the same name. After the 20th rendition of “Guantanamera,” however, they seek the comfort of rock and roll—the blues-based music that grew from the American South—back at the bars of the beach resorts. 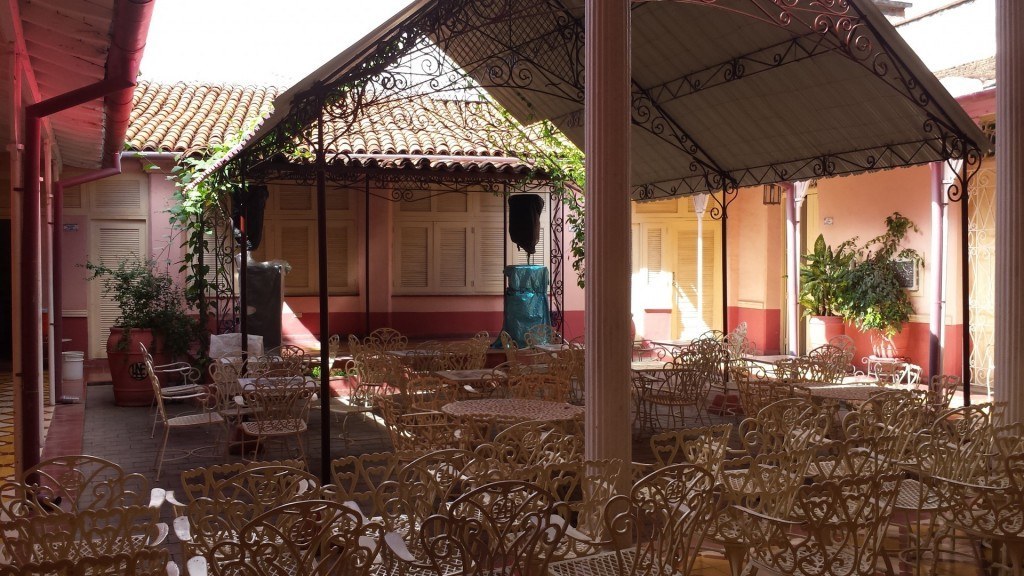 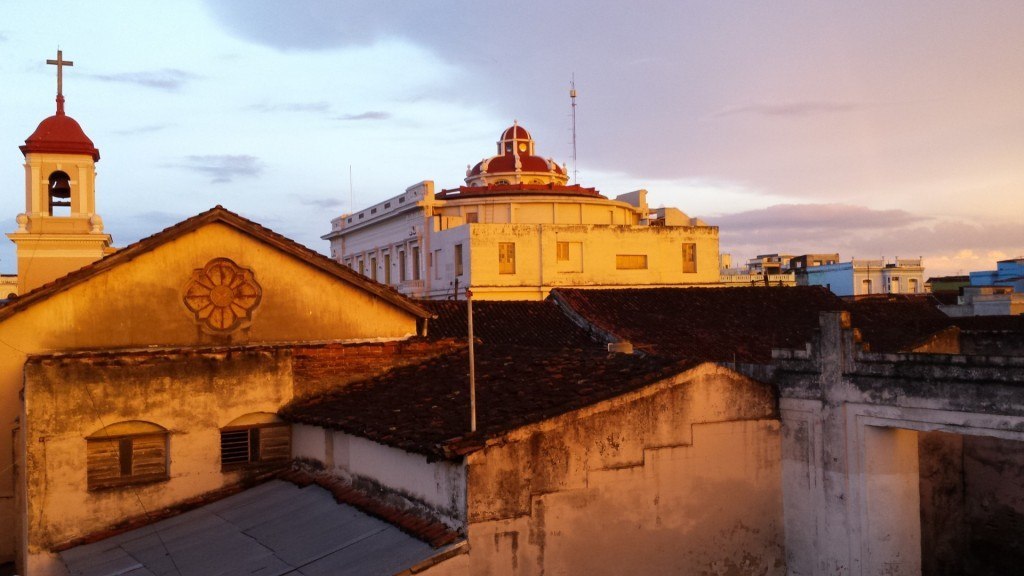 Scholars debate whether playing rock and roll and was ever technically illegal in Cuba. There is no doubt that the government and the party rejected it as a symbol of U.S. cultural decadence infecting Latin America and the Caribbean. And while the United States was always the target of rejection, any English- language popular culture was caught in the net.

Cuban singer and songwriter Silvio Rodríguez noted in a radio interview one day in the mid-1960s that the Beatles were one of his influences. He was promptly fired from his job at the Cuban Radio and Television Institute. But years later, on the 20th anniversary of John Lennon’s death, December 8, 2000, Fidel Castro helped unveil a statue of Lennon in a park in Habana’s Vedado neighborhood. Over the years the late Beatle has achieved a status almost like that of the late Bob Marley in the Caribbean.

It’s hard to imagine after more than 50 years of antagonism between the United States and Cuba that extensive travel, commerce, and cultural interchange between the two countries was once the norm.

After the revolution, the country’s extensive media infrastructure passed into the hands of the state, and the state viewed popular American music as the music of the enemy. At the same time that rock was being suppressed, however, artists were finding ways to let it in the door. A small department within the Instituto Cubano del Arte e Industria Cinematográficos (Cuban Institute of Cinematographic Art and Industry) officially had the job of writing and performing scores for government films. It also became a haven for artists whose work couldn’t find an outlet elsewhere. Silvio Rodríguez worked there.

In the United States, musicians have to crack the code of the corporate music industry. No one tells them what they can’t play—they just can’t get a contract if the company doesn’t think it will sell. In Cuba, musicians and artists have been engaged in a long negotiation about the place of all forms of art in Cuban society. What does it mean to be a rocker? What roll does art play in a nation? Ask this of a metal head in the United States and he might mumble “sexdrugsnrocknroll” and fall to the floor. Rock is more earnest in Cuba.

At the same time that rock was being suppressed, however, artists were finding ways to let it in the door.

It’s not about business. It’s about living.

“I was in the university, studying English,” said Alberto in his kitchen, “and I had long hair. I listened to various radio shows including American Top Forty with Casey Kasem.”

To an American, listening to DJ Kemal Amen “Casey” Kasem in the 1970s and 1980s was hardly a revolutionary act. His shows reflected none of the wildness and raw energy of rock and roll. But it’s somehow fitting that the son of immigrants was sending American rock and roll across the world.

“A lot of young people were listening to this program. But with this current against youth, they said that the people who listened had ideological problems.”

“How did they know you listened?”

“And for his clothes,” added Dennis.

“Ah, yes, and for my clothes. I wore jeans. I had Levi’s, Wrangler’s and rocker boots. Nobody wore clothes like these. I got these from family who had been living in the United States since the sixties.”

In short, in 1980, Alberto was like the kid in every U.S. rock-and-roll movie—the outsider, the rebellious one, the guy who needed to declare his individuality. But he was living in a country that had embraced collectivity.

The living quarters in Alberto’s house were neat and orderly. His shop occupies the front room. It, too, was orderly, but it’s also a shrine. Every inch of wall space is covered with pictures of rock bands torn from magazines. He pointed to each figure. He knew all the names. He knew who formed new bands with who when their old bands broke up. He knew who played on whose albums. Black Sabbath’s 2013 release was playing on his small digital music player. “Ozzie Osborne,” he declared. “Ozzie Osborne!” He couldn’t believe Ozzie recorded with the old band again. He was ecstatic. He’d never seen the rocker’s American-made reality TV show. What is it about this music that enraptured him?

“I was born in el campo,” he said. “I’m a country boy. My mom is a country poet. My family likes Mexican music, but I hate it, I hate it!”

He was referring to the traditional Mexican music with the polka-like beat. It’s popular in the countryside of Cuba and many Latin American countries. People who don’t like it seem to detest it.

Alberto and his friends started Rock Night on October 22, 2001. They first named it the Golden Rock Era, “because rock is gold,” he declared. It has moved among different venues. He said that rock, in fact, is not well loved in this city, but that the faithful keep it alive.

On one visit to his home, as we talked in his shop, a customer arrived to pick up a pair of shoes. We moved out of the way.

“No no, sit,” scolded Alberto.
But we moved and said, “It’s business,” as if that trumped all other considerations.

“No no,” Alberto protested, handing off the repaired shoes and collecting a small fee. The customer nodded and left.

Alberto turned and said, “It’s not about business. It’s about living.”

And so he persevered.

Authors’ note: We keep up with Alberto, Miguel, and others in Sancti Spíritus. In 2015 we brought electric guitar strings that are difficult to find in Cuba to Miguel, and we regularly trade news with Dennis on Facebook. Despite many Americans’ fear of a Starbucks on every corner of Habana, change will likely come slowly to Cuba, especially in provincial towns like Sancti Spíritus. But it will come.