Sometimes the mountains are green with springtime vegetation, the sky clear and bright blue; sometimes they’re blanketed with fluffy white snow against a blue-grey background, obscured by a swirl of cloud.”

The day started with a massage in a five star hotel—my “gym” here in Iraqi Kurdistan—and that morning, after I finished yoga in the women’s section, I skipped the indoor heated pool with its walls of windows overlooking the city, and hurried, as much as one can, through the Jacuzzi and the steam room so that I could lie down and have someone rub the stress out of my shoulders.

Less than a month before that day, one of my former students died in a fire. His name was Abdulfattah. He was older than my average eighteen year old student—maybe as old as mid-thirties; it’s hard to tell. People age quickly here. The sun darkens and weathers the skin, and the dry air wicks moisture out of the face, leaving it shriveled, lined, sunken. It is common here to start graying in one’s twenties. I am constantly surprised to find that people I’d thought to be in their forties or even fifties are younger than I am. Whatever his age, Abdulfattah, in spite of the fact that I’m a woman, in spite of the fact that I may have been younger, was always respectful and polite to me. Rumor has it he got a massage himself the day he died, although at a parlor of a different sort, a brothel sort. This is why, rumor again claims, his family didn’t want to bring attention to his death with a memorial.

The last student at my university who died was honored with a memorial. He died in a car wreck. He wasn’t my student, and I hadn’t known his name before his death, but I’d known his face. At the memorial, teachers and friends spoke of the deceased. One student sang a mournful song in Kurdish. During her speech the director choked up, which brought tears to my own eyes. It was a beautiful and moving service.

Death is frequent here. Saddam killed my students’ fathers and uncles, and today they have ISIS to fear. When someone close to them dies, they change their Facebook profile to a black screen. It’s happened enough that I didn’t have to ask to figure out the meaning. 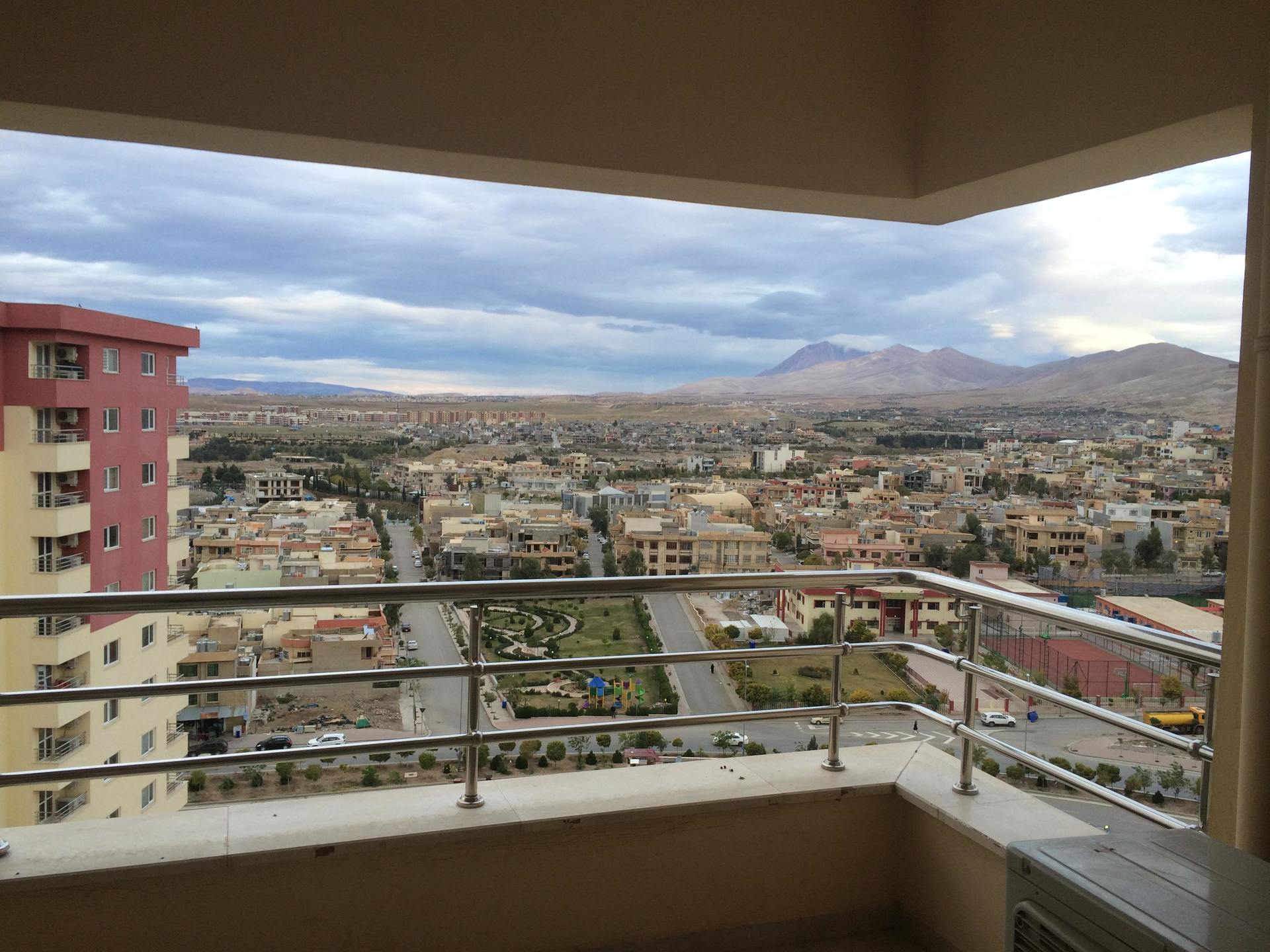 After my massage, I sat in the steam room. One of my coworkers, an ex-smoker, likes it because he thinks it’s good for his lungs, that it cleans them. It certainly can be hard to breathe in there. You have to make an effort. I like it because I think it plumps out the wrinkles that I’ve gained in four years in this arid climate. I then lounged in the Jacuzzi, above which pinpricks of light are fashioned to look like stars in a sky. How lucky we are, I thought, listening to the babbling brook and birdsong piped in through invisible speakers. Government workers in Suley haven’t been paid a full wage in over a year, but I can afford this.

That night I played poker with friends in an apartment I used to live in, an apartment from whose balcony I took picture after picture because the view of the mountains, from the eleventh floor out of twelve, is spectacular. Sometimes the mountains are green with springtime vegetation, the sky clear and bright blue; sometimes they’re blanketed with fluffy white snow against a blue-grey background, obscured by a swirl of cloud.

Around eleven pm, my chips were dwindling, and I was about to leave when someone said they smelled smoke. My old roommate went to check her ashtray in the kitchen, but she didn’t make it that far—she found smoke seeping in through the vents in the laundry room. We opened the front door and thick grey clouds billowed in from the dark hallway, immediately setting off the fire alarm.

I ran back to tell the others. We rushed out of the apartment, only the smoke was too thick, the hallway too dark, and we were forced back inside. The entrance had already become too smoky to breathe; we retreated to the living room. Bewildered. Verging on manic.

I thought of a time tubing in rapids and going under. How, before, as a strong swimmer, I’d never understood how drowning was possible. And then, when I was sucked under, I thought, oh. The current, so much stronger, was in control, not me. I would not escape on my own. The water whipped me around, threw me against the bottom of the river, and spat me back out before breathing became a problem. All I got was a scratched shoulder, a bruised leg, and a newfound realization of my own mortality.

We opened the front door and thick grey clouds billowed in from the dark hallway, immediately setting off the fire alarm.”

… I wanted to shake them, and say no, you don’t understand.“

The delay was short; we chose action. We turned our phone flashlights on, ducked our heads, and exited. We took an immediate right down the side stairs. One of our party froze for a minute at the top, scared to go down, but after a few floors, the smoke cleared, and she followed. We burst out into the night, relieved. People filed out, some wild-eyed, clutching babies and bags, others sleepy, grumpy even, having been roused from warm beds. One family on the eleventh floor, who had chosen to remain, was on their balcony, waving and screaming for help. We watched from below, hands clasped at our hearts.

We discovered later the fire was on the tenth floor, in the electrical shaft next to the elevator, right below the laundry room where we had first seen smoke. The fire burned hot, fusing the electrical wires, but was almost immediately extinguished when the heat burst a nearby water pipe. The real problem was the smoke, which, compared to the size of the blaze, was profuse, and dangerous, filled with plastic particles.

That night, my throat hurt, like I had smoked twenty shishas in a row. We all blew our noses and compared blackened tissues. We all told each other our stories, where we were, what we were doing, how we escaped. People nodded at my story, and then told me theirs, and I wanted to shake them, and say no, you don’t understand. A woman clad in socks, slippers, a bathrobe, and an overcoat over the lot, commented to me that people on the lower floors thought it was a drill, didn’t want to leave their apartment, didn’t want to wake the baby, while people on the upper floors had all faced the prospect of their death.

I also discovered later Abdullfattah didn’t burn. He had gone out a set of side stairs, as we had, but the doors at the bottom were locked from the inside and he couldn’t escape. He died of smoke inhalation.

Eventually the family was led off the balcony, and the inhabitants of the building, all employees of the university, were bused to a hotel. The next day I went back to my gym. I did yoga and swam, taking comfort in mindless movement. I sat in the Jacuzzi, sluggish from lack of sleep, a bit dazed, staring up at the fake stars. I thought about Abdullfattah and his ever-ready smile. I wish he’d had a memorial. I wish we’d acknowledged his loss. I stepped into the thick steam of the steam room, watching it billow around me, and tried to breathe.