the sun is hot and high in the sky and we strip off and swim out into the waters through which all these men passed, one way or another, over it or on it or struggling in it.

adin shows me how to hold the stone: not snug in the crook of first finger and thumb, but braced lightly between them, as one might hold a rare egg or a piece of old pottery burnished by the sea and washed up on the aegean coast. i can make a good stone skip three times, five or six if you count the final skittering hops, the rings of disturbed water overlapping such that they seem one coterminous tail to the sunk comet of the pebble. adin can send a misshapen fistful of minerals leaping close over the incoming waves ten times, in bounds which diminish but are nonetheless quite discrete.

afterwards we pitch pebbles at targets around the bay: submarine boulders, styrofoam jetsam, plastic bottles half-filled with seawater and set on the peaks of coastal foothills. adin’s slight arm is slow and measured and snaps like a whip, and the stone hisses past the polyethylene soda bottle twice before smacking it squarely on the third pitch and tumbling it into the shallows.

you’re good at this i say

yes he says i was sniper

yes. he throws a stone high in the air with his left hand and it turns wildly, briny vertices catching the sun’s light, and he draws back his right arm and draws out the moment with it and the first stone hangs over the water and the second stone leaves his right arm in a hard flat line and strikes the second as it descends with a dull clack and the two stones meet the surface of the water together, dizygotic icaruses swallowed into the sea.

the sun is hot and high in the sky and we strip off and swim out into the waters through which all these men passed, one way or another, over it or on it or struggling in it. under maritime law any shipwreck in navigable waters which is not only sine animo revertendi, or abandoned by its rightful owner, but also sine spe recuperandi, or abandoned and not to be recovered, is considered to be formally derelict, and fair game for whichever scavenger first falls upon it. the kurds horse around and squirt water from their hands and if you duck your head below the surface you can hear the bloated carcasses of their smuggled brothers rubbing over one another in the deep.

we towel off and pitch more stones at further targets: crenellated frontex warships, the crests of gentle waves, the lights now clinging to the westernmost shore of asia minor in a slender line. impossible to tell, at this distance, whether settlements are thinly strung along the coast, or whether a whole trading town has been flattened into monolinearity by the deceptive span of the aegean sea. it is easy to imagine being fooled by this haze of pleasant blues, standing at the brink of europe overlooking the hypersaline gyre as it sweeps silently southward to cascade over the continental shelf, for it does not seem so very far. not as far as the high passes limping down from the qandil mountains where turkish artillery scores the night sky with white fire, not as far as the endless turns through the iraqi borderlands among the asphyxiated and asphyxiating in the reeking belly of a smuggler’s truck, so close and so simple when set against the butchery of the turkish traffickers’ byways. who could stand on that shore, with europe scarcely a stone’s pitch away, and not cast their life as a lot sent skipping over the ceaseless waves? 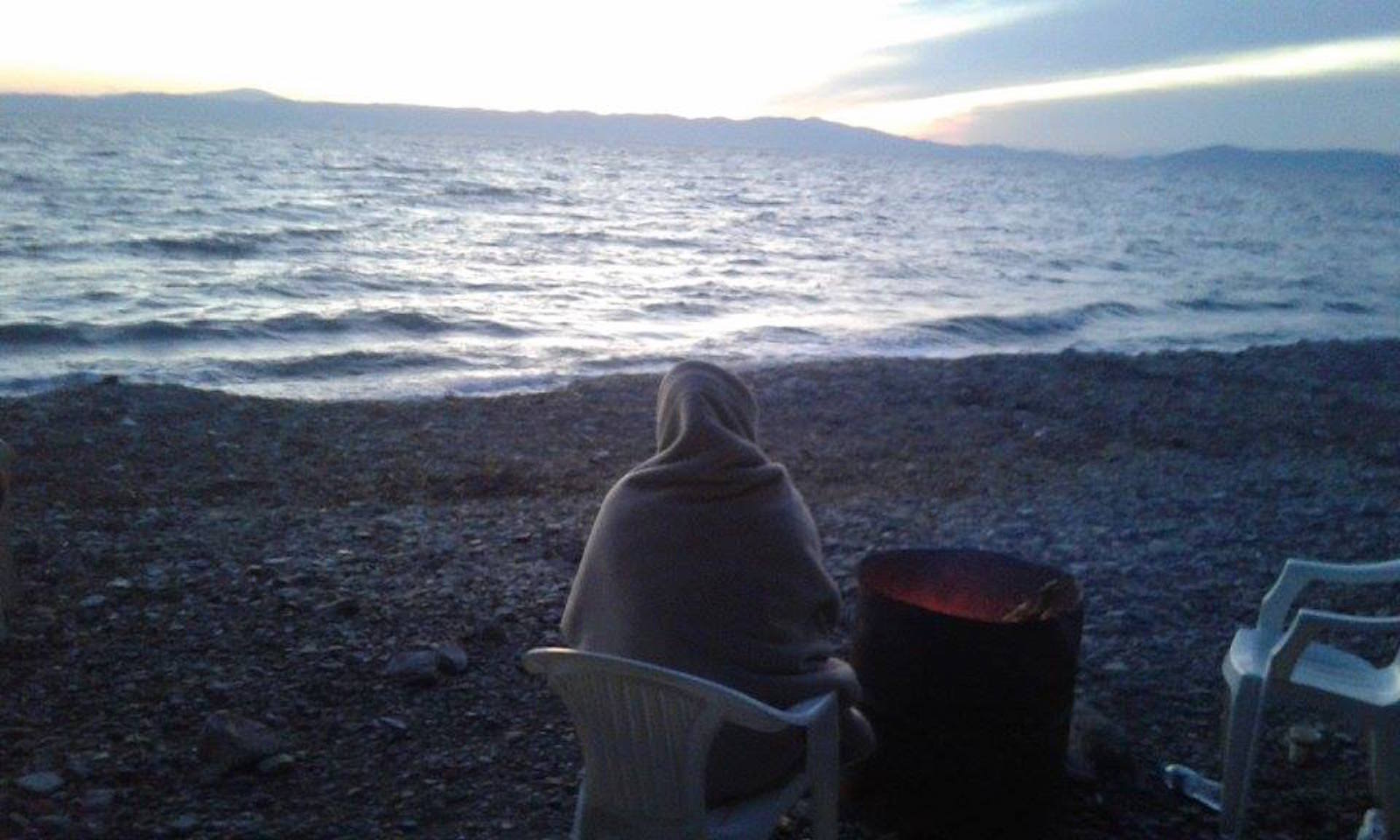 it is easy to imagine being fooled by this haze of pleasant blues, standing at the brink of europe overlooking the hypersaline gyre …

a stone leaves adin’s war-hardened hand in a high clean parabola and he pulls up short and rubs his leg. cramp? i ask. he does not understand, i mime, he understands, he laughs, he pulls up his shorts to expose the coarse wound where three isis bullets entered his leg on the outskirts of mosul. we sit and light cigarettes and he shows me a photo on his smartphone, a broad-chested man sitting with his back to a sun-dashed wall in the shade of a spreading vine.

this is my brother he says. he died.

he one man. one. they two hundred

yes isis. he is alone. is not run. he is hurt but he is not run. adin mimes holding an ak-47 as a child might mime with a stick, bracing his cut-up forearms against his thin chest, and his grip on the hot mediterranean air is sure beyond all question.

you understand? he asks.

they are coming, many, many. thirty, forty, he is dying. he is dying them. the phantom gun leaps and rakes phantoms, and no bullets spray into the mild surf breaking on the shore. then he is die. before they catch him he is dying himself. the phantom gun is turned upward, ghostly muzzle against adin’s real chin, and kicks once and is still and dissipates into air. adin mimes with his fingers, clenched against his temple then bursting out in a spray of shell casings and tissue and cranial bone.

i say i am sorry

he is very brave man. iraq is need him.

the whole world needs him.

adin has a stick-and-poke tattoo on his shoulder of a woman’s name, rising and falling across a rough line of self-harm scars as the incoming tide ripples over submarine ridges. it is the name of his girlfriend who also died in iraq, though i do not know how: shelled by turkish fighter jets as she slept lightly in a pkk warren, splintering her own skull with her own bullet before daesh could fall upon her, or otherwise churned into the blood-soused earth elsewhere along the long road. it flexes and twists in the dying light as he tosses a stone from hand to hand and sings softly, in soranji. it is a song he used to sing with his men as they sat on bluffs overlooking the mosul plain, elegiac syllables muttered around cigarettes and drifting out over the ransacked city where no music may be made and no cigarettes smoked, on pain of execution by stoning or a cursory bullet. it is a song about being with someone, adin says, and then the next day they are not there, and the day after that they are not there.

adin mimes with his fingers, clenched against his temple then bursting out in a spray of shell casings and tissue and cranial bone.

i say i am sorry.

a fisherman sculls through the twilight shallows between the bay and the open sea, olive hands rasping on the olive wood of his oars. he casts a net as nets have been cast for centuries and will be again, after the cracked hulls of the frontex frigates which churn his ancestral shoals are utterly devoured by seabed parasites, and the descendants of the current shoals unscatter and return to these seas. it is the most horribly timeless moment, this soft song whose words mean nothing to me, the timbre of their sorrow, the invisible turks on the opposite shore igniting lights as the sun expires and leaks into the mesmer of the strait and its murderous currents, the fishing boat drifting as boats have latterly drifted in these waters laden with the dead and the desperate to live, the flight of stones from adin’s hand high over the water and the bodies in it and the light blazing and diminishing over its inscrutable surface. they will keep him here till the end of time, skimming stones into the blackening water, and the stones will bounce eleven, twelve, maybe thirteen times, and they will diminish and sink below the waves.