In Search of Buddha’s Daughter: A Modern Journey down Ancient Roads.
by Christine Toomey
New York: The Experiment, 2016

A review by Laura Michele Diener

While the numbers of women joining Roman Catholic orders are declining drastically worldwide, Buddhist nunneries are flourishing, not just in traditional regions in Asia but also in Europe and North America. Inspired by the joyful faith she noted among young Tibetan refugee nuns living in India, Christine Toomey, renowned investigative Sunday Times journalist, decided to query just how “this most ancient of philosophies has subtly infused many aspects of modern life.”

In her book, In Search of Buddha’s Daughters: A modern journey down ancient roads, she pursues her question throughout Asia, North America, and Europe. encountering female Buddhist monasticism in its seemingly infinite varieties. In doing so, she confronts thousands of years of Buddhism history. The reader unfamiliar with the subject soon realizes that asking, what is Buddhism? is akin to asking, what is Christianity? Here some reference material would have been appreciated–a glossary for sure, and perhaps a family tree charting the different orders as they flowed out from northern India via merchants and missionaries. But Toomey focuses not on the traditions themselves, but rather the women who embrace them, and those women form the fascinating heart of her explorations. She encounters women with backgrounds as varied as the Buddhist teachings they practice–a Tibetan princess, a former Bollywood star, a bestselling romance novelist. Although Toomey tends to concentrate on the celebrities, she interviews enough so-called regular nuns to demonstrate the extraordinariness of their ordinary stories. Some women left happy marriages to ordain as nuns while others women found certainty in their calling as children. There is no one path to monasticism.

Toomey begins her travels in Nepal, where the Buddha was born around 480 BC (in what was then a kingdom in northern India). Over the centuries, Buddhist followers have crossed mountains and oceans, and today they are no less peripatetic. The Nepalese monasteries house not only local women but Tibetan refugees escaping ravages of the Chinese government. The Burmese monasteries contain refugees as well as women from Japan and Sri Lanka. Many of these women initiated at a young age, like the Tibetan princess who ordained at eleven. Others ordain as an alternative to the poverty-stricken rural economy and the endless cycle of childbearing. As Rigzin, a Nepalese nun explains: “I would have been married young, had two or three children, and spent the rest of my life working the fields.” At the same time, monastic life possesses its own challenges, requiring harsh physical and mental discipline. One Burmese abbess explains, “Unless a girl or young woman has a strong sense of calling, it’s a very hard life that they’re unlikely to stick with.”

Although monasteries can serve as safe spaces for women in war-ravaged societies, the nuns Toomey meets are far from silent regarding injustice. The Tibetan nuns, in particular, risk extraordinary personal danger to protest the brutalities of the Chinese government and the exile of the Dalai Llama, currently living in northern India. The Singing Nuns of Drapchi (a Chinese-run prison in Tibet for political prisoners), already imprisoned for peaceful protest, sang songs in their cells to honor of the Dalia Lama, leading to years of horrific torture. In one of the most effecting scenes of the book, Toomey interviews Dramchoe, one of the former singers who survived six years of such torture. As Toomey soon realizes, “These are not women who have chosen to ordain as a way of running away from the world.”

There is no one path to monasticism. 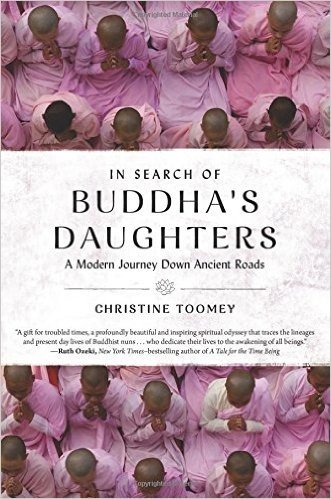 Although it fosters inner peace, monasticism brings no escape from the ills of outside society. Gender inequities permeate the lives of nuns as they do for secular women. Tibetan nuns have spent centuries cooking for monks, while being barred from pursuit of religious study and participation in the traditional public debates. “As is the case in many religions or religious denominations, the question of how far women are permitted to progress along the ordination path has become a controversial issue in Buddhism in recent years.” While the general term for taking monastic vows is ordination, there are multiple stages of ordination available, with those ordaining at the higher levels assuming responsibilities of teaching and leadership. Yet, in Tibetan Buddhism, for example, women can never achieve a level beyond that of novice.

Some monks are sympathetic to the full ordination of women, for example the Gyalwang Drukpa, head of the Drukpa Order of Himalayan Buddhism, who encourages nuns to train in kung fu, and declared that “the answer to many questions being asked in modern society is that more empowerment of women is needed.” But many others firmly oppose further ordination. One Burmese nun who had traveled to Sri Lanka (where customs differ) to ordain at a higher level, found herself summoned before a council of senior monks upon her return. When she refused to publicly apologize for her ordination, they sentenced her to prison.
Buddhist monasticism attracts a growing number of women in the West, enough that Toomy spends the second half of the book describing her travels in Europe and North America. Their motivations differ drastically from their Eastern Sisters. For one thing, Toomey makes clear from the start,“women in the West certainly do not become nuns to ensure financial stability.” And Buddhism, for all its popularity in certain forms of cultural jargon, possesses a much shorter history in western countries, arriving on the West Coast during the nineteenth century Gold Rush along with the waves Chinese immigrants. It migrated into Britain through civil servants returning from the East, and caught mass cultural attention via Edwin Arnold’s 1879 epic The Light of Asia. Mid-twentieth century literary landmarks, such as Jack Kerouac’s 1958 The Dharma Bums as well as the work of beat poets like Gary Snyder introduced Zen Buddhism to a wider audience searching for inspiration. During the late sixties, hippies from both sides of the Atlantic began pursuing Eastern religions, with the most devoted traveling eastwards for ordination. Several of the contemporary western communities are their creations. Tibetan refugees also contributed to the increasing presence of Buddhism in Europe and North America.
The Western nuns Toomey interviews demonstrate the infinite malleability of Buddhist traditions. These were women who came of age during sexual revolution of the 1960’s and had no intention of succumbing to eastern gender hierarchies. At Bodega Bay, north of San Francisco, for example, the Theravada nuns fully ordain women alongside men. Some of their institutions have adapted specifically to western sensibilities, such as the Japanese Soto Zen monastery in Northumberland, where the monks and nuns address each other as, “Reverend,” and pray to the tunes of Gregorian Chant. But Toomey is careful to point out that gender controversies flourish even in the supposedly more enlightened West. She visits one English monastery that split over the question of full female ordination, with all female members leaving in disgust over the monks’ intransigence.

Taken together, the stories of the Western nuns may strike readers as less compelling. As college graduates and professionals, they are women seeking answers to the postmodern malaise rather than refugees or political prisoners. While the calm of a Buddhist monastery may be an answer to the emptiness of a materialistic society, no Western woman has to worry about the dangerous ramifications of her choice. But the ties between the monasteries and orders traverse the continents, often blurring the traditions so thoroughly that what emerges is a truly global creation, for example, the “Engaged Buddhism,” originating in France under Vietnamese immigrants, which emphasizes social outreach alongside mindfulness.

So what can readers take away from this criss-crossing of worlds and cultures? What do a BBC presenter, a Tibetan princess, and a Vietnamese refugee actually have in common, spiritually speaking? Whether Buddhist ordination brought them physical safety, financial stability, or emotional refuge, the women Toomey encounters all describe the happiness that has permeated their lives. Sheer joy in their vows unite these disparate women who have seemingly dedicated their lives to renunciation. In order to embrace their lives as Buddhist nuns, they needed to relinquish some possibility in their lives, and yet, not a single woman Toomey interviews regrets her choice. As Choying Khandro explains, “I feel more proud of being a nun than of being a princess.”

Toomey also uncovers a global commonality, perhaps surprising in a world whose diversity continues to overwhelm us. I finished the book realizing that neither Westerners nor Easterners can escape the vast human capacity for unhappiness. In the fifth century BC, a sheltered Indian prince found only emptiness in his privilege, so he turned his back on all of it and eventually transformed himself into the Buddha, the one who is awake. This paradigm has repeated itself in Buddhism for centuries, and modernity has only enhanced the yearnings of movie stars, princesses, and doctors for a different kind of fulfillment. Most readers will emphasize, but it’s easier to forget that the peasant woman struggling in the fields may also possess spiritual aspirations, that she’s never so beaten down that she forgets the hunger in her soul. And yet Toomey articulates, over and over, that women around the world, regardless of their ethnicity or their social class, honor the fire that rages in their spirits and claim the right to define their own happiness.