Melissa Uchiyama offers a view into the transformations and lessons that come from finding home in a culture different from one’s own.  -M 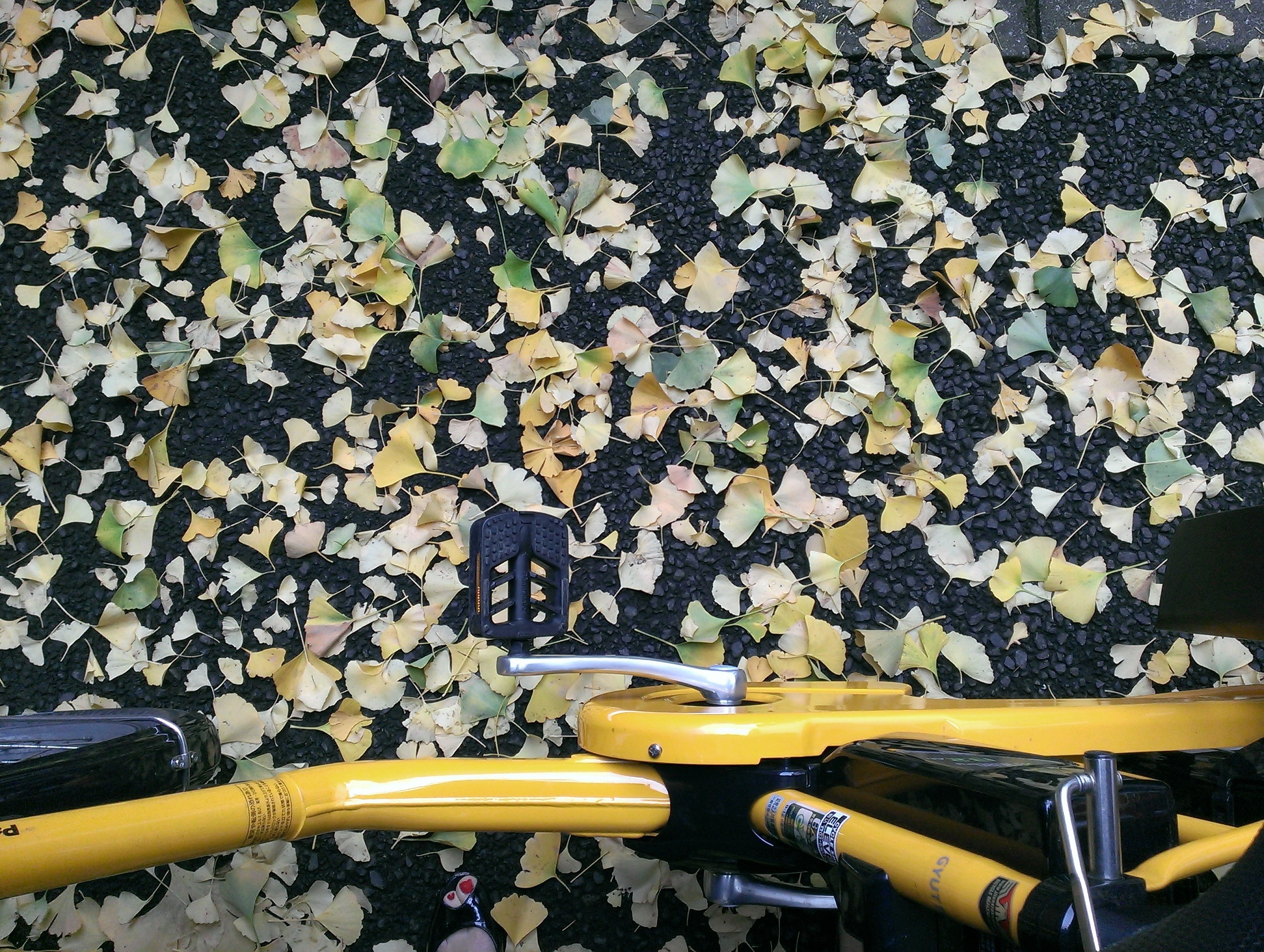 I had every convenience of a first language.

I feel like I’m in a coastal town, like the drop-off just over those seven tracks is really a beach rode, a path flanked by dunes and coolers and blue crush. Sometimes I see a mirage. This part of Tokyo can trick me into thinking it’s a beach town.

After I situate kids at their local preschool, I liberate myself from sidewalk to street. People generally bike on sidewalks here. It can feel tight on a sidewalk. You navigate and ring your bell and say, “Sumimasen,” excuse me.

I realize one July night, coming home from my in-laws, we can take the streets and go much faster. So now, especially, without the kids, I get to feel a bit reckless, like I’m on a beach cruiser with white-wall tires, with plans to lay out on a neon-hued towel. Instead of work, I’ve got a peely paperback and some Coppertone oil. The faraway sea, Tokyo’s waterways and harbor finds me.

Before my spousal visa and before touching down in Japan, I knew Karate Kid. Daniel san had paved the way for my journey to Asian life, when they flew to Mr. Miyagi’s beloved, yet torn Japan. I knew the tea ceremony with the Daniel’s love interest, the moment when she took out her hair pick, and all of their passion cascaded down. I knew about those little drums the people warbled in their hands, their yukata sleeves ringing beauty like bells. 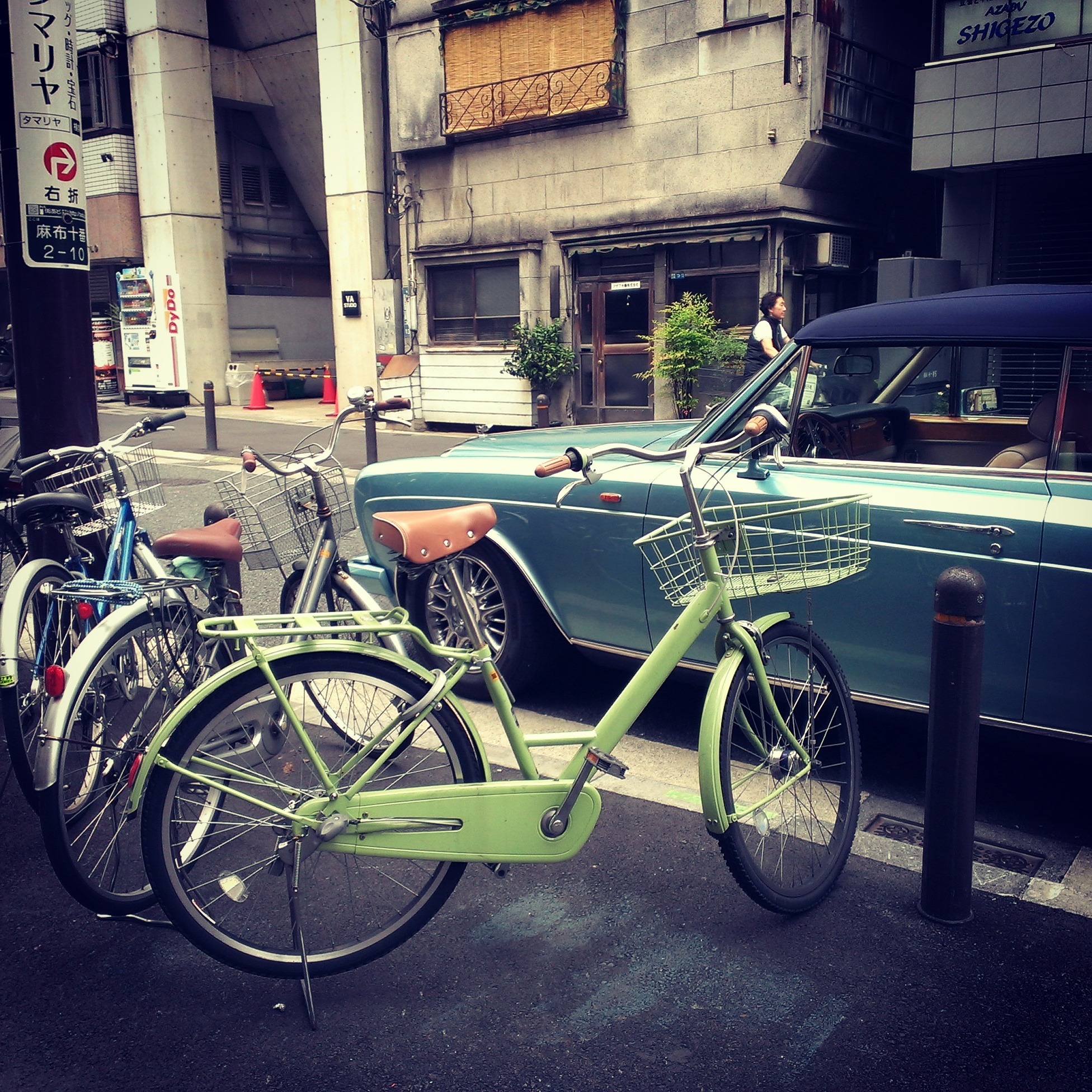 I thought of Daniel as I headed out of town and left my American life as a new bride of six months. I anticipated, in between the anxiety of leaving, incidentally, just ten minutes from South Florida’s Delray’s beach, that my new home would be like life on an island. We’d pull out nori and gleaming fish and earthy green tea at every meal. We would stretch out our ringed fingers and wave to fisherman. It would be a city and an island, the thrill of both worlds! Skyscrapers and beach! It would be a glittering Manhattan Beach meets something ancient and bamboo-hued. We would step out for sake and lychee martinis and spy mottled koi swimming below bridges and swirling in ponds.

I left Florida for Japan with my Japanese, yet American-raised husband. We’d been married six months and were ready to began a truly foreign chapter. This was a chance to run with bulls, the Japanese version, that is. This was a chance to live somewhere else, to embrace his heritage and learn how to count higher than ten. I would learn the language and grow my world bigger, as if I was merely exhaling into a red balloon.

He could barely translate signs, yet, I wanted every word, every glance translated as with running ticker tape. I can still be impatient. I need him to remember, I’m different. As much as I embrace it, I’ll always need a hug and a compliment for dealing with such change. After all, I chose this world, the one with him. We’re still here. I’m still here. I’ve adapted, but Japan is still my adopted land. Rather, they took me in and raised me on new foods, new glances, and a new kind of rest. I need all the moments of young love for these people. I need the fuzzy romance of red bean sweets, of genteel nods and regal bows. In between crowded moments of the frenetic Tokyo, I need naps on tatami mats and rolled out futons, waking up to tart yuzu and mikans, those soft-skinned, much sweeter, tangerines. I need to drink up the frothy lattes of matcha, because the other moments are hard.

Before my spousal visa, before touching down in Japan, I knew Karate Kid. 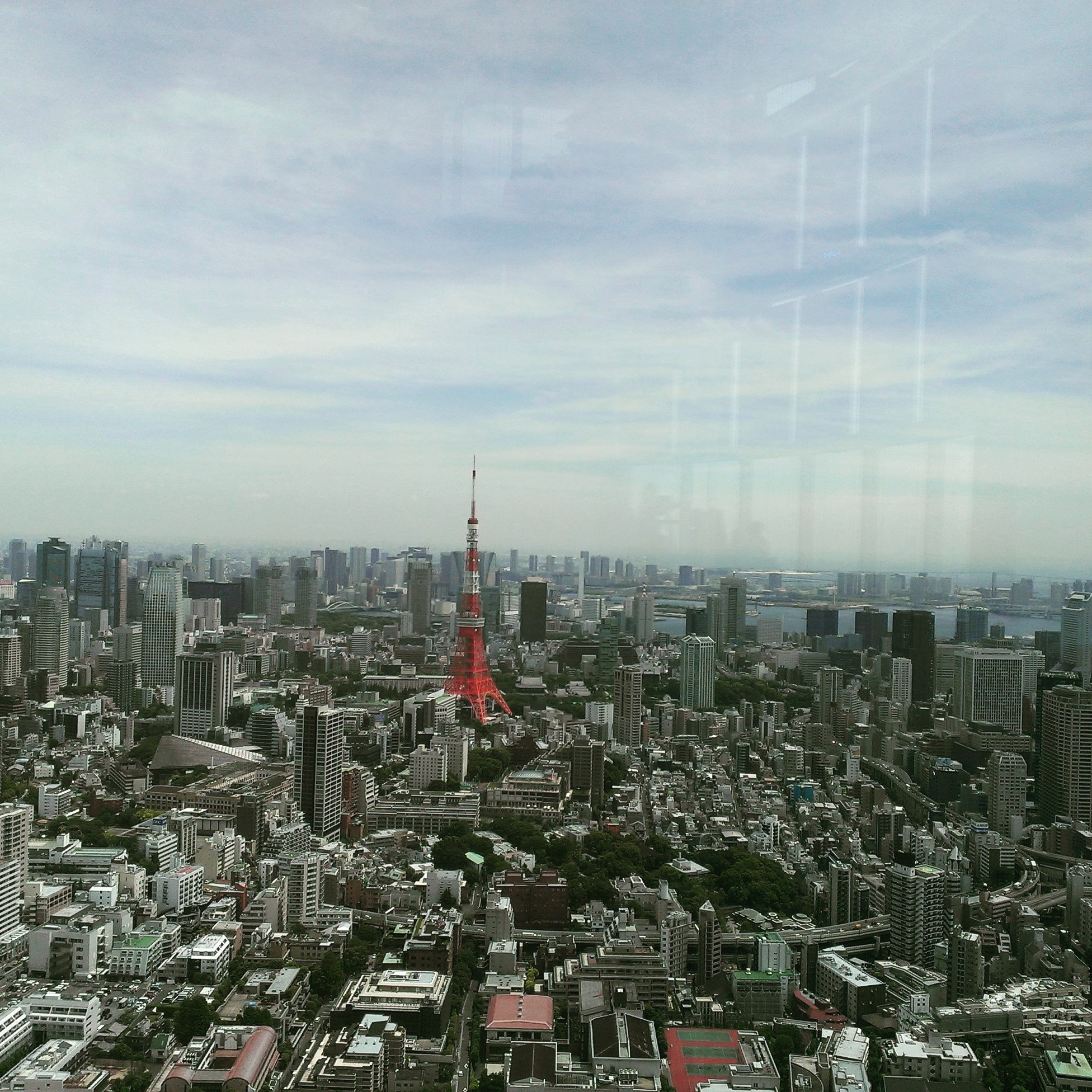 We are on an island, but I’ve since learned, Karate Kid was filmed on Miyagi’s Island of Okinawa. Not the mainland of Japan, not Tokyo, but a whole other experience. Here, you touch down at Narita and see miles of concrete, pillars of apartment complexes. Everything seems poor and needing work outside those train windows sailing towards Tokyo. It is a carpet of concrete, minus some rice paddies. Apartments are crowded. Closets are sparse.

I circle my pedals and navigate new streets. I never had hills, back when it was just me, back when I envisioned a life parked near my childhood streets. Mountains were just metaphors and I had every convenience of a first language. Now I use translation functions on my phone and switch gears.

Neighborhoods are multidimensional here and there are four seasons. I ask foreigner groups and check online, but silly me, beaches are still so far away. I hear the approaching shinkansen, which comes in so fast, it doesn’t even roar. It is little more than fuselage gliding through air, which can also sound like waves coming in just a few streets over. I pedal to look, forgetting. My white-tipped wave is really just the bullet train and sometimes three rolling in on one set; these just-over-the-horizon-beaches are merely mirage. Just skyscrapers and the smattering of still-standing wooden homes. This is Tokyo, my urban home. Some words I understand. For long stretches of conversations, I am frustrated. I am almost mute. We are making a life, though. I can’t just take off. I can’t run into waves.

I bike in flip-flops and tanks, freckles multiplying at the same rate neighbors pull out their parasols. This is a culture of treating skin right, not aging a wink. Surely I stand out with decades of sun spots and eyes that communicate with crinkles. Seven years ago, we lovebirds held hands as the plane took off. I stared at the projected map, sailing unchartered waters, heart pounding, while my husband slept, his only worry, how I would fare. We arrived nearly 26 hours into travel, in a haze of adventure, eyes wet from the sting of goodbyes. I wish I recorded my wide eyes as we approached final descent. This is another kind of alive: the minutes, hours taking in a new home, trudging suitcases, watching salarymen. The miles exploring grocery stores aisles. The way a blanket of snow cups its hands around a Buddhist temple gate and those blue tiles. Every new image sears. 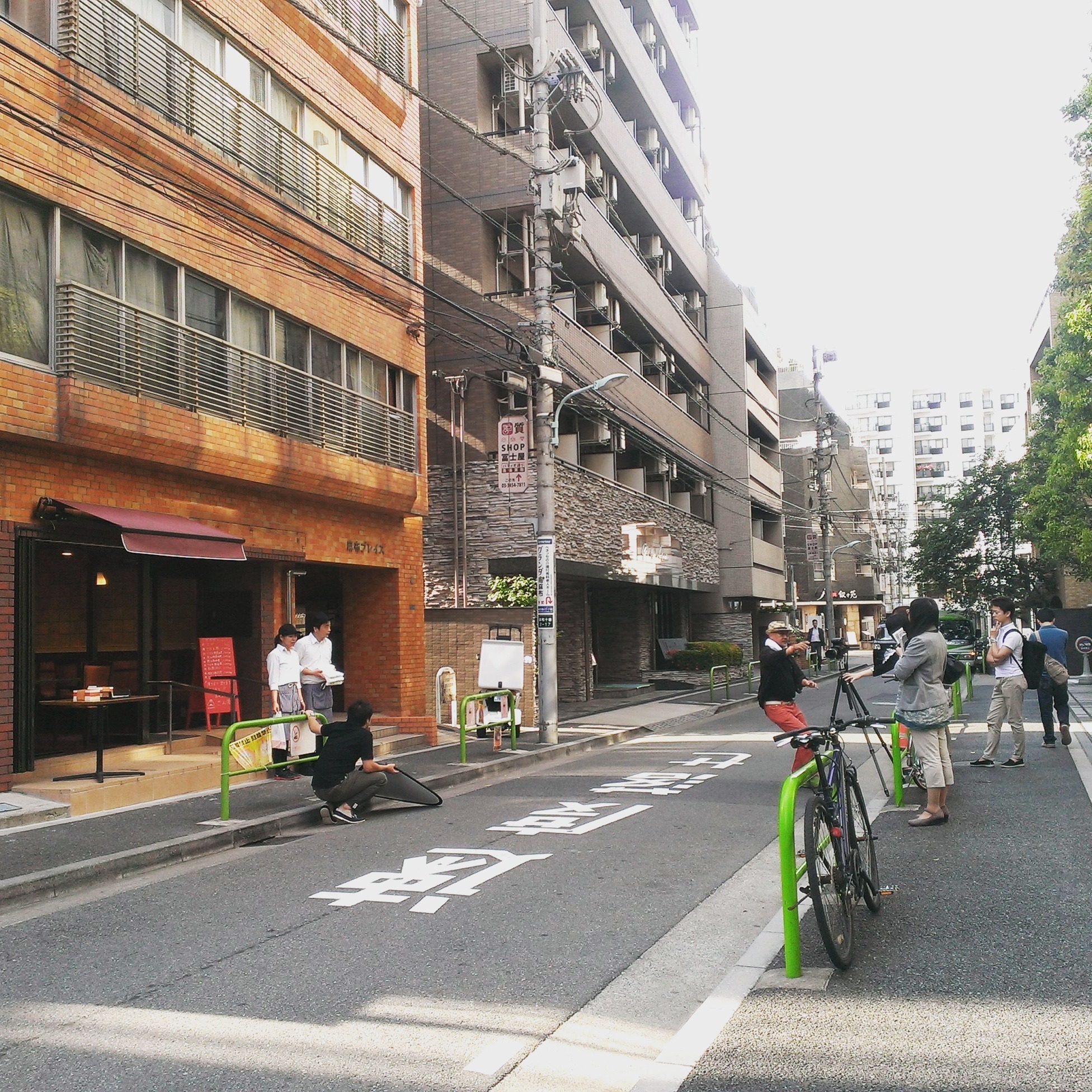 I’ve left Japan and returned maybe ten times now. I feel increasingly less foreign. I’ve birthed two kids here, been to two weddings, and one funeral. I am learning about rites here. I take in this mega city with great comfort and little alienation. The strain of language-learning and the obvious confusion flits off as I pedal, as I pack and unpack, and marvel at my city. Heaviness comes off in streams and maybe even burns off with every jet’s fuel. With every ride and new exploration, I find more to love. It is good to leave and come home. I am stronger, more resilient. I belong in that ‘Returning with Visa’ line.

I clog down our street walking dogs in my getta, those wooden sandals. I sound like a Clydesdale, but it is all air and no worry, what you get in flip-flops: all lightness and levity. It’s the scent of fish and seaweed, maybe, but it is also the scent of buoyancy, of choosing a life of wind and salt. That’s what I want.

Some evenings, I hear an old bamboo flute. I hear three twangy strings of the shamisen. Neighbors dole out noodles as long as rafts and I uncover another soft spot: I have become attuned to the subtly of change here. I know the first ebbs of fall and first sprigs of spring. I know how to accessorize a kimono in winter and how to select the robes of summer. I can appreciate a cycle.

I do love this land, beach or not. It is not the Jersey Shore, not the Art Deco hotel pools of Miami, the ties of string bikinis, or the rock-hard crabs of Key West. It is rather, a humid high tide and sometimes the storm, butting up against glass offices and pre-war wooden beams. Tokyo is soft and soulful in a city sort of way, with people who also need a getaway. Japan is the simplicity of no central air, the waving of bamboo fans, cold noodles and barley tea. It is the dying whir of cicadas and a heralding of the next thing, shorter days, and the yellow gingko leaves that will fall.

It’s the scent of fish and seaweed, maybe, but it is also the scent of buoyancy, of choosing a life of wind and salt. 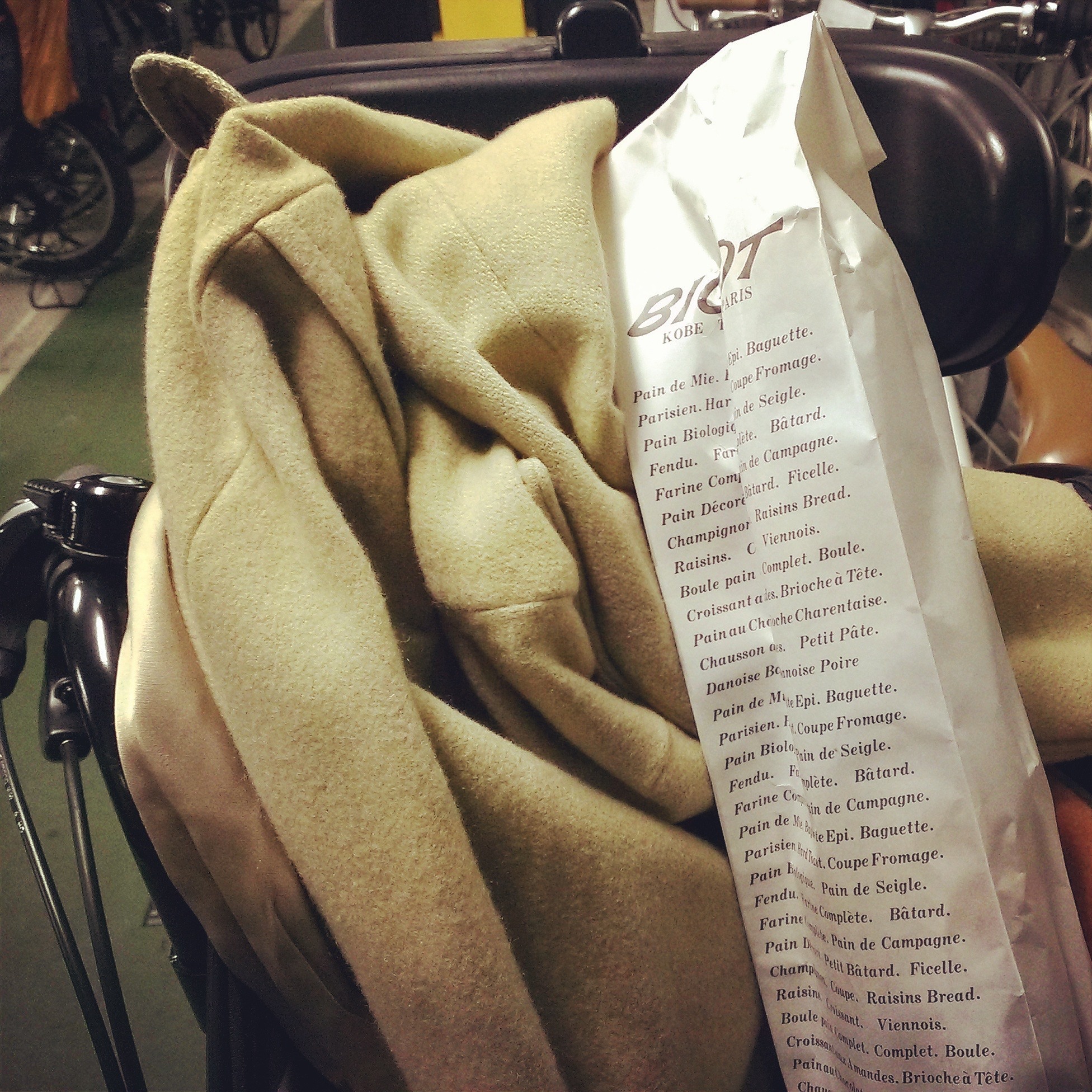 The strain of language-learning and the obvious confusion flits off as I pedal, as I pack and unpack, and marvel at my city.

I drrring drrring my bike and go. I inhale and exhale memories that spin and spin before I left go. The click-clack of sandals in time with the trains. It is all senses rolling in at once, all things saying, “This, this is August’s end and the slipping into fall”. This is the life you are choosing—the lingering promise of waves whispering, “find me” and “dive in”. I speak to my kids, saying, “This is your home and so is America, though it seems far”. This is the land where they were born. It is a thick root.

I pick-up my kids and ask about their day at preschool, all of us bumping over cracks in the sidewalk, then onto the road. We cruise on giggles as we stop off for salmon and summer’s last corn. There is no mirage, no need to drag heels on pedals. This is what it is to make a new life. It is wandering, it is comparing, climbing off trains and getting on bikes. It is pedaling a new street and finding we are, quite suddenly, already home. We clamor inside and take off our shoes. 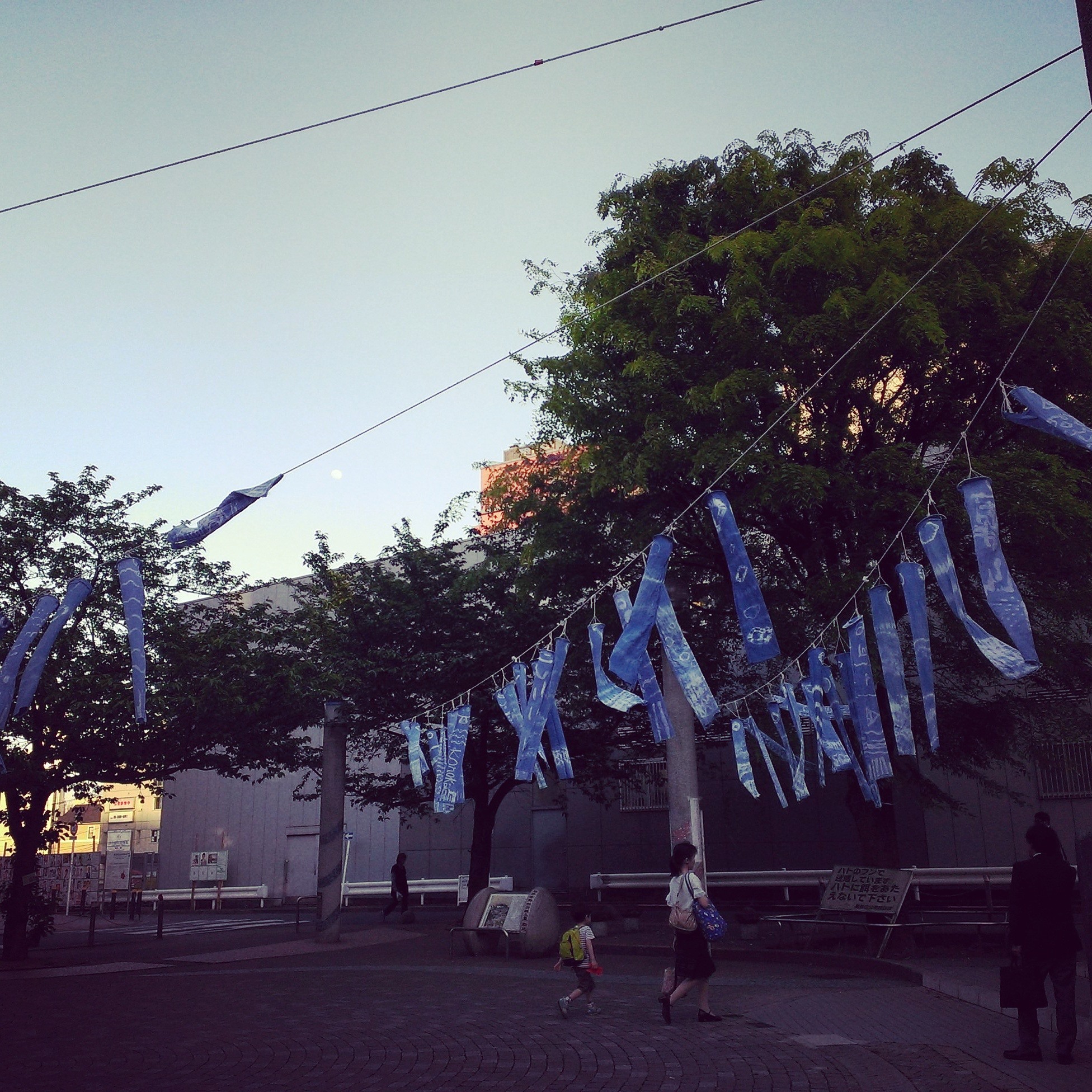